Hosts Sri Lanka outplayed woeful England by eight wickets in the second one-day international in Colombo on Saturday to take a 2-0 lead in the seven-match series. 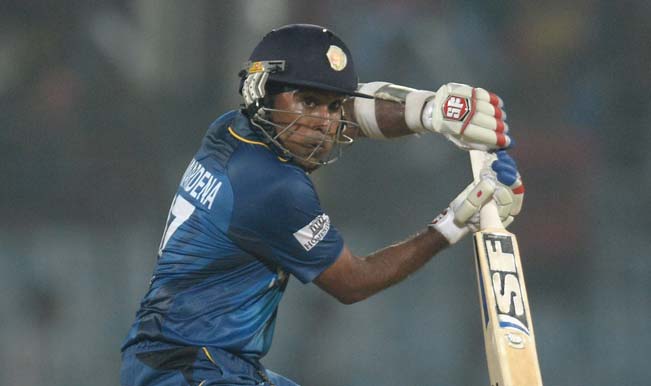 Colombo: Hosts Sri Lanka outplayed woeful England by eight wickets in the second one-day international in Colombo on Saturday to take a 2-0 lead in the seven-match series. Unorthodox spinner Ajantha Mendis grabbed three for 33 as England were skittled for 185 in 43 overs after electing to bat in a match reduced to 45-overs-a-side because of bad weather. Also Read - India-Sri Lanka Bilateral Talks: PM Modi Pitches For Devolution of Powers by Lankan Govt to Minority Tamils

The veteran duo of Kumar Sangakkara (67 not out) and Mahela Jayawardene (77 not out) then put on 149 for the unbroken third wicket as Sri Lanka romped home with 10.4 overs to spare at the Premadasa stadium. Sri Lanka had won the first game by 25 runs at the same venue on Wednesday. The third match will be played in Hambantota on December 3. Also Read - Lankan Navy, Indian Ships Battling Re-ignited Fire on Board Oil Tanker

Both teams wore black arm-bands and observed a minute’s silence before the start to mourn Australian batsman Phil Hughes, who died in Sydney on Thursday of head injuries sustained by a rising ball. Bats and caps were displayed outside the dressing rooms as a mark of respect and flags flew at half-mast over the stadium.

Ravi Bopara top-scored with 51 and Joe Root made 42, but just eight boundaries were hit in the entire England innings as none of the other batsmen settled in. Mendis led the way as the slow bowlers shared six wickets and the seamers chipped in with four wickets. England lost half their side by the 28th over with just 117 runs on the board.

Opener Moeen Ali, who hit a century in the previous match, made only two when he attempted a wild heave off Tillakaratne Dilshan and was bowled in the second over. Ian Bell, playing his 150th one-day international, was dismissed by left-arm spinner Rangana Herath for 11 and Dilshan also removed Cook for 22. Root appeared in good form when he was trapped leg-before by Sri Lankan captain Angelo Mathews after Eoin Morgan fell to Thisara Perera for 17.

Bopara was dismissed in the 42nd over, caught at mid-wicket off Mendis, as he attempted to push the scoring in the company of tailenders. Sri Lanka lost both openers, Dilshan and Kusal Perera, by the eighth over with the total at 37 before Sangakkara and Jayawardene steadied the innings for the hosts. Left-handed Sangakkara smashed eight boundaries, including the winning hit off Harry Gurney over the bowler’s head. Jayawardene hit eight fours and a six. The series is a build-up to the World Cup that will be played in Australia and New Zealand in February-March.