The incident took place when Steve Smith was on crease with the Mumbai-lad Rohit Sharma given the bowling attack. Rohit appealed for an LBW, thinking he has got his man that did not please the young Aussie batsman Steve Smith who in turn made a gesture towards Sharma. 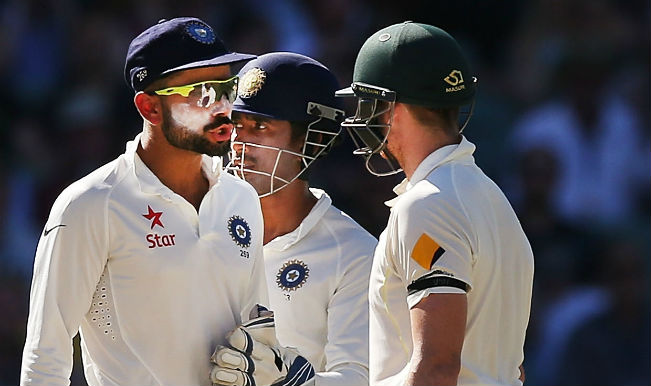 It was quite surprising for any viewer watching India vs Australia duel being devoid of single incident of ‘heated arguments’ on the first three days of Adelaide Test. But looks like the onslaught of ugly sledging has finally hit the India vs Australia Test series. Day 4 of the 1st Test match began with David Warner blowing a  kiss to India pacer Varun Aaron after he got the pint-sized Aussie opener bowled on a no-ball. And if one thought quota of misbehaviours were over, just then it was followed by haughty Indian stand-in-skipper Virat Kohli’s harsh words of advice for centurion Steve Smith. The incident embroiled to such a level that Virat Kohli warned Steve to “Stay in your limits”! Also Read - LIVE IND vs PAK T20 World Cup 2021 Live Cricket Score, T20 Live Match Latest Updates: TOSS 7 PM IST; Virat Kohli's India Start as Favourites vs Babar Azam-Led Pakistan in 'Mother of All Battles'

The incident took place when Steve Smith was on crease with Rohit Sharma bowling. Rohit appealed for an LBW, thinking he has got his man that did not please the young Aussie batsman who in turn made a gesture towards Sharma. All this did not please famous for being short-tempered Indian captain Virat Kohli, who joined in the on-field spat asking Steve Smith to “stay in [his] limits.” Also Cricket Highlights: Watch India vs Australia 1st Test Day 4 Full Video Highlights Also Read - IND vs PAK Dream11 Team Prediction, Fantasy Cricket Hints ICC T20 World Cup 2021: Captain, Vice-Captain, Playing 11s - India vs Pakistan, Team News For Today's T20 Match 16 - Group 2 at Dubai International Stadium at 7:30 PM IST October 24 Sunday

Earlier, a verbal-war took place when Varun Aaron got David Warner bowled, who was batting at 66 at that moment. The Indian pacer could not help but celebrate it and giving a good send-off to the departed Aussie opener. The joys for Indian camp did not last long as the decision was reversed after the third umpire spotted a huge no-ball. David Warner, walked back to the ground and with vengeance as he mocked Varun Aaron’s over joyous celebrations by saying ‘Come’On’ on his face.

Watch the complete video of the ugly brawl between Virat Kohli and Steve Smith on Official Website of Star Sports.