Gavaskar and Laxman echoed that "Words are inadequate to describe MS Dhoni's contribution to Indian cricket." 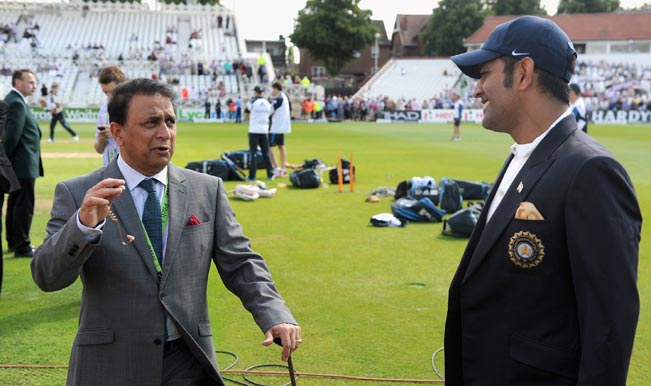 New Delhi, Dec 30: Former captain Sunil Gavaskar and ex-India cricketer VVS Laxman have said the contributions of Mahendra Singh Dhoni, who has just retired from the Test format, to Indian cricket “cannot be measured” in words and added that he handled the transition well. In a shocking turn of events, the Indian cricket captain Dhoni today retired from Test cricket with immediate effect, citing strain of playing all formats, after his team lost the Border-Gavaskar Trophy to Australia in Melbourne.

“What he has achieved for Indian cricket is incredible, what he brought and his contribution cannot be measured in words,” Gavaskar said.

The batting great felt Dhoni felt the strain on not just his body but also in his mind.

“It just got a little too much for him. There were huge expectations, so they were putting a lot of strain on him. The overseas defeats and seeing the team concede 500 runs and bowling 100 overs in almost every Tests took a toll on his mind also. I have always said that a captain is as good as the team. He may have thought that it’s the right time to hand over Test captaincy to Virat Kohli. Virat was not affected by captaincy as he reeled off a century in each innings. That’s why he is stepping away for Kohli, who is having fantastic series in Australia,” he told ‘NDTV’.

Both Gavaskar and Laxman said this will give Dhoni, who remains India’s T20 and ODI skipper, more time to prepare for the upcoming tri-series, involving England besides Australia, and the 2015 World Cup Down Under.

“This will give him more time to get his mind rejuvenated for the tri-series and World Cup,” said Gavaskar.

Laxman also said it will give him time to relax.

“He is still the ODI captain and India will require him in the World Cup in Australia and New Zealand where India will look to retain the title. But personally, I feel he could have stayed on for another 2-3 years with India playing a lot of Tests at home next year, and he could have again given a shot at getting India back to top position,” Laxman explained.

The stylish Hyderabadi, who was a little surprised, also spoke about the time following the retirement of greats such as Rahul Dravid and Sachin Tendulkar.

“The world will remember him as someone who led with authority. He was a match-winner with the bat and had a unique technique to his keeping. He always ensured that the dressing room atmosphere was good. His legacy is that he created a good transition in Indian cricket,” the 40-year-old added.

Gavaskar singled out the Test match after which India rose to the number one position in Tests, and in which he also scored a century, as Dhoni’s best moment. He also praised his smashing hundred against a Shoaib Akhtar-inspired Pakistan in Faisalabad. While Laxman said the two knocks he produced in seaming conditions in Trent Bridge and Oval earlier this summer were his best; Gavaskar said when the captaincy was given to Dhoni, he did his job with aplomb.

“As a skipper Dhoni surely had his moments and down moments as well and has been very vulnerable overseas,” Gavaskar concluded.