T20 World Cup: Why Sania Mirza Plans to Take Break From Social Media on Day of India vs Pakistan; Yuvraj Singh Backs Her

T20 WC, Ind vs Pak: Sania Mirza posted a clip on her Instagram where she said 'toxicity' is the reason behind her decision.

Dubai: Ace tennis star from India Sania Mirza has decided to take a break for a day from social media on the day of the much-awaited clash between India and Pakistan at the T20 World Cup stage. The tennis star posted a clip on her Instagram where she said ‘toxicity’ is the reason behind her decision. Due to her marriage with Pakistan star cricketer Shoaib Malik, she is often subject to hate and trolls during an India-Pakistan game.Also Read - India Were Scared in T20 World Cup Match Against Pakistan: Inzamam-ul-Haq

The video posted by her contains text, which reads: “Me disappearing from social media and toxicity on India vs Pakistan match day.” Also Read - What Motivated Shreyas Iyer to Get His Maiden Test Ton? Coach Pravin Amre Reveals

Reacting to the reel, which has been captioned “bye,” India cricketer Yuvraj Singh wrote, “Good Idea.” You can check out Yuvraj Singh’s comment below: 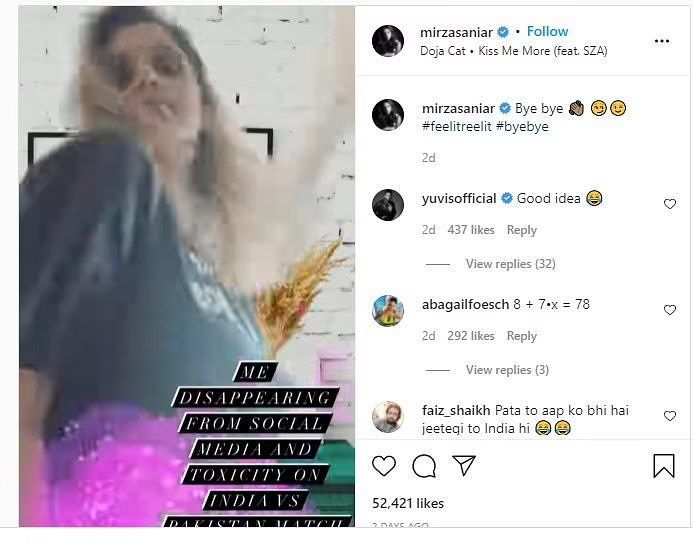 Meanwhile, while Indian skipper Virat Kohli has called the fixture to be ‘just another game’, Pakistan captain Babar Azam has stated that his side is confident of beating their neighbors for the first time in a World Cup. It would be interesting to see who holds the edge over whom. For sure, India – given their WC record against Pakistan – would start overwhelming favourites.

The arch-rivals have faced each other five times in T20 WC matches and India has managed to win all the matches. It remains to be seen whether Pakistan will end their hoodoo of losing WC matches against India, or if Kohli’s men will continue their winning streak against their neighbors.