#ThankYouDhoni Trends After Former India Captain Gets Dropped From BCCI’s Annual Contract; Can he Still Play World T20 in Australia?

Dhoni was in Grade A last year in the contract and his omission has as expected made fans emotional. While some still cannot believe it is the over for the veteran.

So is it the end of the road for former India skipper MS Dhoni? The Board of Control of Cricket in India (BCCI) announced the 2019-20 annual retainership list and it did not feature the name of the 37-year-old, and since then social media is abuzz with hashtag #ThankYouDhoni. Also Read - IPL 2021: MS Dhoni to Join CSK Camp in Chennai on March 11

Is that going to be the case or will we see Dhoni in Indian colours once again in Australia, later this year in the for the ICC World T20? Dhoni was in Grade A (INR 5 Cr) bracket last year and his omission has as expected made fans emotional. While some cannot believe if it is the last of Dhoni that they have or others are still hopeful that their skipper’s home stretch is yet to begin. Also Read - Rishabh Pant Has Practiced Hard Like MS Dhoni: Farokh Engineer Hails The Southpaw's Wicketkeeping Skills

Here is a screenshot of the India trends on Twitter: Also Read - MS Dhoni Offers Prayers at Dewri Temple in Ranchi Ahead of IPL 2021, Fans Gather in Numbers to Catch Glimpse of CSK Captain | SEE PICS 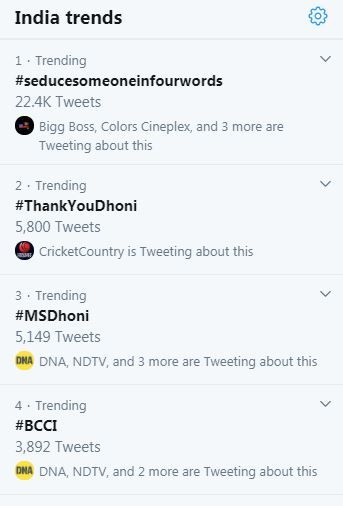 Does being dropped from BCCI’s central contract mean Dhoni can never play for India?

First, if a player is omitted from the central contract, it does not mean he cannot represent the country in the near future. The two-time World Cup-winning skipper can be included in the squad on a pro-rata basis. This also means that the contract snub in any way does not imply that he will not play for India anymore.

Was this on the cards?

Considering he has not played a single international match since India’s exit from the 2019 Cricket World Cup semi-finals in England in July, one can safely say, this was coming.

Not long back, in an interview, India coach Ravi Shastri made it clear that if Dhoni plays well in the upcoming IPL for Chennai Super Kings he would absolutely be in the reckoning for making it in Australia-bound World T20 squad.

“We had a conversation but that’s between me and MS, that’s in the dressing room. What I feel is that people must respect is he’s played non-stop in all formats of the game for a while. He’s finished playing Test match, and in all probability, hell finish one-day cricket. At his age, probably the only format hell want to play is T20 cricket which means hell have to start playing again, get back into the grooves because he’s going to play in the IPL and see how his body reacts,” Shastri told Network 18.