MS Dhoni calls it quits to his career in Test Cricket. Twitter sympathises with the Indian skipper. 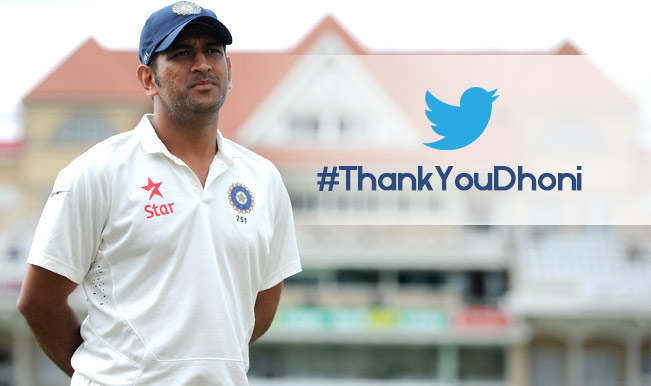 India’s most decorated skipper MS Dhoni announced his retirement from Test Cricket midway through the four-match Test series against Australia on Tuesday. The decision came as a shock and many armchair experts felt the need to mock the 33-year-old for India’s dismal performances in the long format of Cricket on foreign soil. The Board of Control for Cricket in India (BCCI) claimed that Dhoni’s decision to retire was to ease the burden off his shoulders to allowing him to focus on One-Day International’s and T20’s. Also Read - India's COVID Tally Surpasses 53 Lakh-mark, Deaths Stand at 85,619; 5 Worst-hit States Report High Level of Recoveries | Key Points

#ThankYouDhoni, started trending on Twitter as soon as the news broke on Social Media. The mocking remained but a large number fans felt disappointed with the decision and felt that Dhoni could have just relinquished captaincy instead of withdrawing from Test Cricket on the whole. Here are some of the interesting collection of Tweets pertaining to Dhoni’s retirement. Also Read - Football | MS Dhoni's Aggression And Humility Influenced Me, Says Anirudh Thapa

A man of simplicity -no farewell lap, no press meet #ThankYouDhoni #DhoniRetires

Brave decision Dhoni. A king is always a king. Your journey as Test cricketer was #Fabulous. #RespectDhoni #ThankyouDhoni

When he was on the field anything was possible.. I always had faith we could comeback from any situation. He was THAT player. #ThankYouDhoni

MS Dhoni was just 10 short of 100 Tests. This shows that he is selfless and never played for records. #ThankYouDhoni

No home match retirement.No made up series with WI or Bangladesh. Retire just like a true Champion does! #DhoniRetires #ThankYouDhoni