A last-minute goal from Real Madrid's German international mid-fielder Tony Kroos broke Spanish hearts and gave the reigning World Champions a 1-0 win in the friendly game played between the 2014 and 2010 World Cup winners in Vigo. 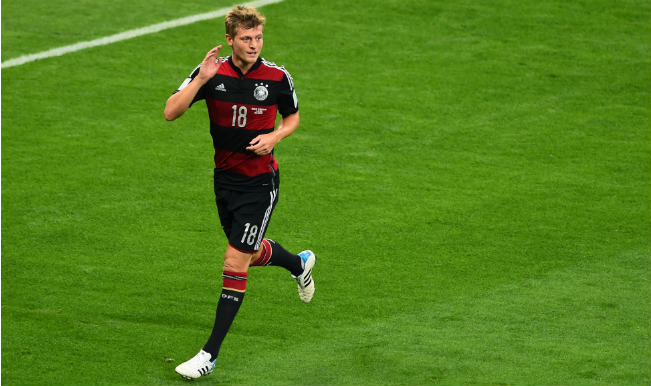 Madrid, Nov 19 A last-minute goal from Real Madrid’s German international mid-fielder Tony Kroos broke Spanish hearts and gave the reigning World Champions a 1-0 win in the friendly game played between the 2014 and 2010 World Cup winners in Vigo. The game was built up as a bit of a grudge match between the last two best teams in the world, but failed to live up to expectations for a variety of factors Tuesday, reports Xinhua. Also Read - Spain Declares Nationwide State of Emergency to Curb Second Wave of Coronavirus

Both coaches fielded sides with plenty of changes from their last games and Spain coach Vicente del Bosque handed debuts to Juventus striker Alvaro Morata and Celta forward Nolito, who was able to make his international debut on the ground where he plays his club football. Meanwhile, Germany paired Real Madrid duo of Tony Kroos and Sami Khedira in mid-field. Also Read - International Flights: Air India to Operate Seven Flights a Week to This Country From Delhi, Bengaluru | Deets Here

A rainy night in Vigo meant the ball skidded off the playing surface. Nolito had the first chance of the game, which was stopped by German goalkeeper Ron-Robert Zieler, who also blocked another effort from Raul Garcia in the next few minutes. Spain were pressing the Germans high up the pitch, although Germany got a decent chance through Rudy, which was saved by Iker Casillas.

Del Bosque made a triple change at half time, relieving Sergio Ramos, Gerard Pique and Sergio Busquets and replacing them with debutant Ignacio Camacho, Marc Bartra and Raul Albiol, which meant altering both his central defenders. Nolito saw a free kick well saved by Zieler but with Spain making a further three changes Del Bosque’s side began to lose coherence on the pitch and the fact he threw goalkeeper Kiko Casila into the game midway through the half, didn’t help the Espanyol goalkeeper on his debut. The fact is Casilla should have done better with Kroos’ shot from outside of the box in the 90th minute but the shot which bounced just in front of the keeper, ended up in the back of the net.