Nottingham Weather, August 8, Sunday: On the final day, if weather permits, India will need another 157 runs but in these conditions, it could prove to be more than a handful with James Anderson, Stuart Broad and Ollie Robinson making the ball talk.

With India needing merely 157 runs to win the first Test at Trent Bridge, Nottingham on the last day, eyes would be upon the skies to see if there are chances of rain. Unfortunately, like most days of the Test, there are high possibilities of showers on the fifth and final day of the Test. Fans would want the rain to stay away and allow the game of cricket to happen. Because of the rain, the humidity would be on the higher side, making the playing conditions difficult for the players.Also Read - RR Predicted Playing 11 vs PBKS in IPL 2021 Match 32: Evin Lewis to Open; Will Jaiswal, Shamsi Make The Cut? 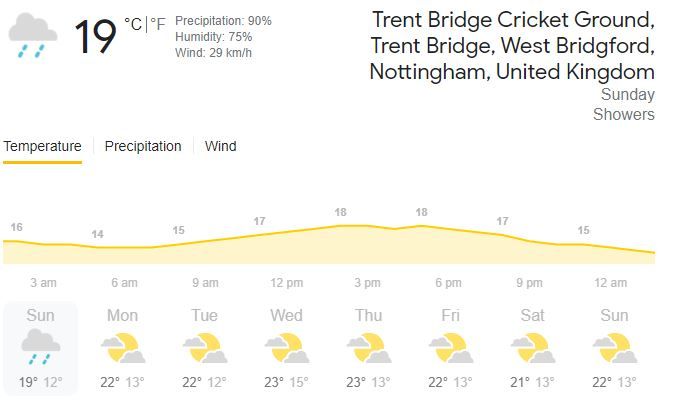 Earlier, English skipper Joe Root led from the front with a superb counter-attacking hundred but Jasprit Bumrah’s five-wicket haul on the fourth day made India favourites to chase down a tricky victory target of 209 against England in the first Test. Also Read - Saba Karim on What May Have Influenced Virat Kohli to Step Down as RCB Captain After IPL 2021

In the time left during the penultimate hour, India scored 52 for one with Stuart Broad dismissing KL Rahul (26 off 38 balls) with a beauty. Rohit Sharma and Cheteshwar Pujara were unbeaten on 12 each. Also Read - IPL 2021: Aakash Chopra Predicts Virat Kohli-Led RCB Will Beat KKR in Dubai

Bumrah (5/64 in 19 overs) polished the tail in a jiffy with the second now ball en route to his sixth five-wicket haul.

On the final day, if weather permits, India will need another 157 runs but in these conditions, it could prove to be more than a handful with James Anderson, Stuart Broad and Ollie Robinson making the ball talk. Sam Curran is also expected to play a decent supporting role.