The US president has done something, probably no other political leader of any country has even thought of- fought in the WWE ring. His WWE adventures ranged from hosting Wrestlemania, shaving WWE Chairman's hair to receiving the 'Stone cold stunner' from Steve Austin.

The 45th president of the United States of America, Donald Trump through his radical ideologies, has forged people with on both sides of the political divide with a lot of opinions about him. Love him or hate him, his flamboyant persona garners a lot of attention, but this is not limited to the political stage. Before coming into power in 2016, Trump was widely popular as a business tycoon and a celebrity television personality and then there’s something the US President has done that in all its likelihood, no other political leader of any country has even thought of- fought in the WWE ring.Also Read - Donald Trump Asks US Judge to Force Twitter to Restore His Account

Here is a video of the US President channeling his inner wrestler on WWE chairman Vince McMahon: Also Read - PM Modi, Mamata Banerjee, Adar Poonawalla on Time Magazine's 100 ‘Most Influential People of 2021

Donald Trump is fighting at the wwe pic.twitter.com/o9LAEV4Nud

Also Read - Trump Claims He Can Knock Out Joe Biden Within Seconds in Boxing Ring, Twitter Says 'Set it Up' | Watch

Trump has a quite a history and association with the World Wrestling Entertainment (WWE) which dates back to 1988 when he sponsored WWE’s fourth edition of the biggest annual event- Wrestlemania. He hosted Wrestlemania IV and V in the famous Trump Plaza (Trump was best known for his skyscraper buildings. And it was Trump Plaza in Atlantic City, New Jersey, that first forged his connection to the WWE).

Since then Trump has appeared in several of the WWE’s flagship shows. He also holds the coveted status which is held by WWE’s all-time greatest wrestlers – Inductee of WWE hall of fame (class of 2013). He is also known to be a WWE fan and a friend of the company’s chairman, Vince McMahon.

Trump was interviewed by Jesse Ventura at ringside during WrestleMania XX, but his most popular appearance in the WWE came at WrestleMania 23, when he was in the corner of Bobby Lashley who competed against Umaga with WWE Chairman McMahon in his corner, in a “Hair vs. Hair” match, with either Trump or McMahon having their head shaved if their competitor lost.

Lashley won the match, and along with special guest referee Steve Austin, Lashley and Trump both proceeded to shave McMahon Head, not just that, Trump even executed of the wrestling manoeuvres on Vince McMahon- ‘the clothesline’ and was also at the receiving end of it when he received one of the most famous finishing wrestling manoeuvres- ‘The Stone Cold Stunner’ from Steve Austin.

Donald Trump still maintains a strong bond with the Mc Mahon family. Linda McMahon, the wife of Vince McMahon, currently works as the Administrator for the Small Business Administration at the Trump administration. 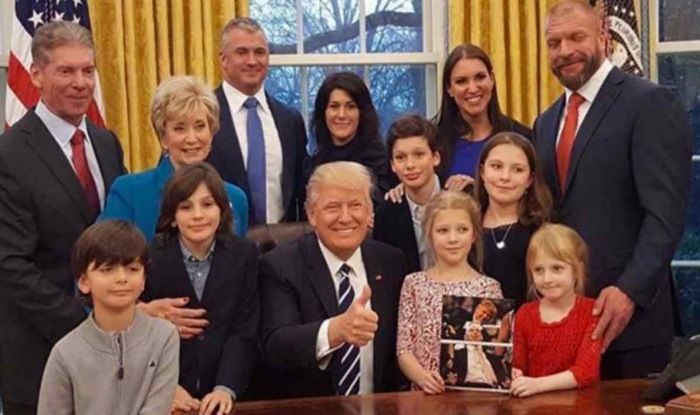