Striking his trademark "lightning bolt" pose as he was introduced further raised the decibels before he got down to business. 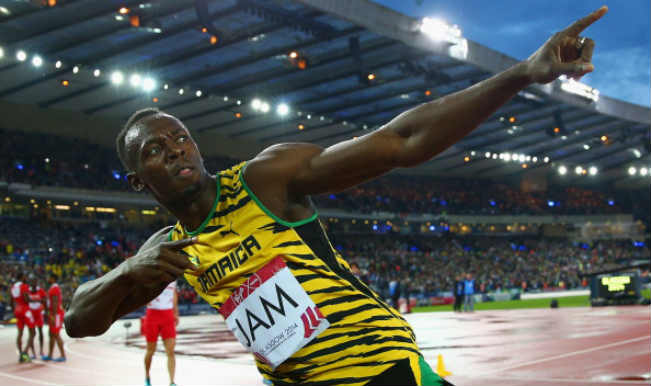 GLASGOW, August 2, 2014: Sprint superstar Usain Bolt added Commonwealth gold to his many accolades on Saturday when he anchored the Jamaican team to victory in the men’s 4x100m relay on Saturday. In a fitting end to the track and field programme at Hampden Park, Jason Livermore, 100m gold medallist Kemar Bailey-Cole and bronze medallist Nickel Ashmeade all safely negotiated their legs before the baton was passed on to the towering figure of Bolt. Also Read - Olympic Legend Usain Bolt Tests Positive For Coronavirus After Celebrating 34th Birthday, Goes Into Self-isolation | Report

The 27-year-old, who has won six Olympic gold medals and eight world titles but was making his Commonwealth Games debut in Glasgow, made no mistake with his anchor run in light drizzle on a soaked track, charging through the line in a Games record of 37.58 seconds. Also Read - Olympia Lightning: Usain Bolt Reveals Name of Baby Girl

Coming into the final stretch neck-and-neck with Danny Talbot, Bolt made fast work of dropping the English sprinter, teeth clenched, arms pumping and eyes glued on the stadium big screen, showing absolutely no let-up as he scorched through the line. Ever the showman, Bolt had earlier delighted the raucous sell-out crowd by dancing along to the Proclaimers hit song “I’m Gonna Be (500 Miles)”, lyrics shown on the big screen for a deafening stadium karaoke moment.

Striking his trademark “lightning bolt” pose as he was introduced further raised the decibels before he got down to business. There was, however, heartbreak for Nigerian Blessing Okagbare as her team could only claim silver behind the powerful Jamaican quartet of Kerron Stewart, Veronica Campbell-Brown, Schillonie Calvert and double Olympic 100m champion Shelly-Ann Fraser-Pryce in the women’s 4x100m relay.

Okagbare had already claimed the sprint double at Hampden Park and was seeking a golden treble. But she and her teammates were outgunned by Jamaica, victorious in a new Games record of 41.83sec. The indomitable Kenyan middle- and long-distance team continued their amazing form on the Glasgow track.

“Our mission was just to get those medals for Kenya. Hopefully we will get all the medals at the African championships,” said Cherono. Cherono and Kisa’s double feat was then replicated in the men’s 1500m by James Magut and Ronald Kwemoi, New Zealander Nick Willis grabbing third spot at the line from South African Johan Cronje.

While not quite as successful as their female teammates, Magut’s gold was the men’s third after those in the 5,000m and 3,000m steeplechase, the latter providing a cleansweep of medals for both the men and women’s teams. “I am really happy with today’s success,” said Magut, who surged to victory in the final stretch. “I always have that finish in the last 100m.”

Not to be outdone, Kenyan Julius Yego claimed victory in the men’s javelin, throwing a best of 83.87m, Olympic champion Keshorn Walcott of Trinidad and Tobago taking silver with 82.67m and Australian Hamish Peacock bronze (81.75).

Mathew Hudson-Smith produced a sterling final lap to hold off Bahamian veteran Chris Brown for an English victory in the 4x400m relay in a time of 3:00.46. Despite having Christine Ohuruogu, the current world 400m champion and former Olympic and Commonwealth gold medallist, in their quartet, England could only claim bronze in the women’s 4x400m relay won by comfortably by Jamaica from Nigeria.

“We were confident coming in, but we couldn’t take anything for granted,” said Jamaican second leg Novlene Williams-Mills, a silver medallist in the individual 400m in a cleansweep by the Caribbean island. “The Nigerian girls did a great job, but we ran a great race.”

Ohuruogu added: “We knew it was going to be really tough today with a Jamaica 1-2-3 in the (400m) final. That always makes you a little bit anxious, but we always turn up with the right attitude and approach and as long as we know we did our best we can be happy.”