Bolt, who has been plagued with a foot injury, again proved his worth as the public's favourite track star, the Hampden Park crowd offering him a raucous welcome. 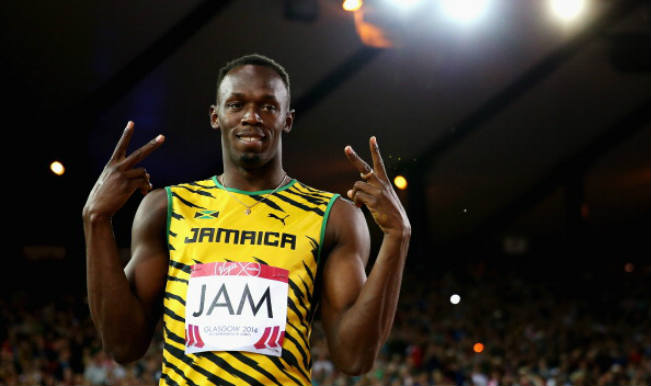 Bolt, who has been plagued with a foot injury, again proved his worth as the public’s favourite track star, the Hampden Park crowd offering him a raucous welcome. That was not completely guaranteed given a report in The Times this week that quoted Bolt as allegedly calling the Games a “little shit”. Also Read - Olympia Lightning: Usain Bolt Reveals Name of Baby Girl

“It’s a lie so I was never worried (about the reception),” he said. “I was just looking forward to coming out here and showing the people that I’m here to have fun, compete and give my best performance. “It felt like I was in the London Games at the Olympics. I love competing in front of a crowd which is really loud, so for me it was just brilliant.

“Injury-wise everything was good. Otherwise I felt a little bit sluggish, but it’s okay.” Bolt added: “I’m just happy to be part of the relay team and compete at the Commonwealth Games. “I love coming out here and competing with my team. In individual sport it’s always good to compete with a team, feel the vibes, enjoy and laugh and have fun and just be one country.”

Pearson dominated the hurdles for a poignant victory after Australian team head coach Eric Hollingsworth was suspended this week for his criticism of her for missing a pre-Games training camp, dubbing her a bad example to younger team members.

The Olympic champion clocked 12.67sec, with England’s US-born Tiffany Porter taking silver in 12.80sec and Canada’s Angela Whyte bronze (13.02). “He lost his job for what he said in the papers trying to justify himself,” Pearson told BBC of Hollingsworth. “But I only did this for myself and the people who are supporting me.

“This medal means so much. It has been a really hard year having been injured and going into the World Championships with a new coach. “But I knew tougher people than me have got through this and come out the other side. For me it was about focusing on what I could control both beforehand and in the race and I came out the victor.”

In another action-packed session, women’s sprint star Blessing Okagbare saw her bid for a Commonwealth treble remain on track after watching her Nigerian teammates qualify for the 4x100m relay final.

The US-based 25-year-old has won the 100 and 200m in impressive style in Glasgow, but opted to sit out the relay heat to recuperate from a heavy schedule. But she and her teammates will be up against a strong Jamaican quartet, including two-time Olympic 100m champion Shelly-Ann Fraser-Pryce, who like Bolt took to the track for the first time on Friday, and multiple world and Olympic medallists Veronica Campbell-Brown and Kerron Stewart.

There was another cleansweep for the mighty Kenyan middle-distance runners, this time in the men’s 3000m steeplechase. It was their third of the Games after the women’s team took all podium spots in their steeple and 10,000m. Unfancied Jonathan Ndiku led the 1-2-3 in a Games record of 8min 10.44sec ahead of Jairus Birech and double Olympic and three-time world champion Ezekiel Kemboi.

But Uganda’s Moses Kipsiro defended his title in the men’s 10,000m in 27:56.11, a savage dip at the line edging out Kenyan Josphat Kipkoech Bett by three hundredths, with Canada’s Cameron Levins taking a surprise bronze. World champion Eunice Sum guaranteed Kenya another medal with an imperious showing in the 800m, clocking 2:00.31, with Scotland’s Lynsey Sharp delighting the crowd by beating another Kenyan, Winnie Nanyondo, to silver by four hundredths of a second.

There was also double Australian gold in the women’s field events, 18-year-old Eleanor Patterson winning the high jump with 1.94m and 2009 world champion Dani Samuels victorious in the discus. And Steven Lewis, with a best of 5.55m, improved on previous silver and bronze performances by taking gold in the men’s pole vault in a vault-off with English teammate Luke Cutts.

Bolt aside, another star name to make their track debut in Scotland was England’s Christine Ohuruogu, who spurned the individual 400m to race the 4x400m relay. Ohuruogu, the current world 400m champion and former Olympic and Commonwealth gold medallist, anchored the the England 4x400m relay team home in 3:27.88 to guarantee some stern competition for Jamaica come the final.