He touched Rohit's feet and kissed him. Once this picture of the fan kissing Rohit became public, Ritika posed a question for Yuzvendra Chahal on her Insta story.

Rohit Sharma’s Mumbai beat Bihar by nine wickets in a recent Vijay Hazare Trophy game at the Just Cricket Academy Ground in Bengaluru. But what made news was a fan who breached the security in order to go and meet Rohit Sharma. He touched Rohit’s feet and kissed him. Once this picture of the fan kissing Rohit became public, Ritika posed a question for Yuzvendra Chahal on her Insta story. Her message read, “You and I both have competitions.” Also Read - Graeme Smith Backs Sourav Ganguly For ICC President's Role, Hails Former India Captain Ability as Leader And Administrator 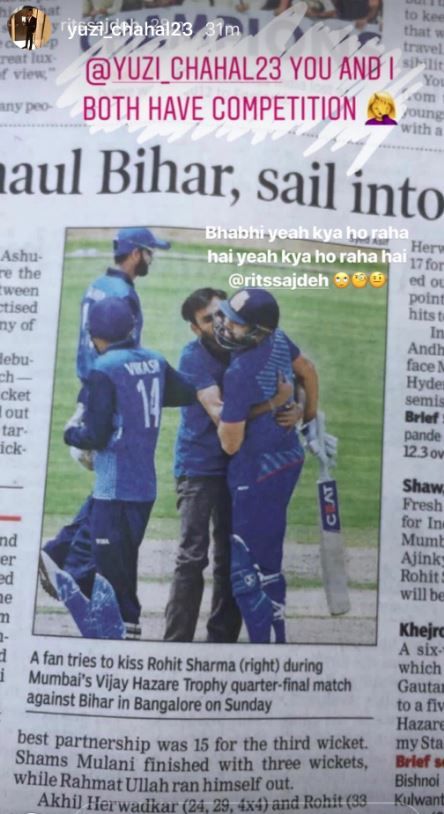 Here is how Twiter reacted to this episode.

Just after watching this pic , I realised that Rohit Sharma was not even in the side of #TeamIndia and We won the World Cup in 2011. That’s insane. We have so much expectation from you in the upcoming World Cup in England in 2019. I will pray to GOD to keep you in prime form.

Hope @ImRo45 is fine after this. #YouToo pic.twitter.com/nikBkXsZbQ

Earlier, he led the Indian team to the Asia Cup triumph. He was captaining the team as Virat Kohli was permitted rest by the BCCI.

Cricketers in India are considered nothing short of demi-god and recently India captain Virat Kohli faced something similar when a fan breached the fences to go and kiss Kohli during the Hyderabad Test which India won by 10 wickets to blank the touring Windies in the two-match Test series.

Rohit Sharma will make a comeback to the squad for the ODIs against the Windies starting October 21.