De Villiers, in a detailed statement on Friday, finally broke his silence on the controversy surrounding his international comeback during the ICC World Cup 2019.

India skipper Virat Kohli has lent his support to Royal Challengers Bangalore teammate AB de Villiers after the retired South African great broke his silence on his recent controversy. The Indian captain described de Villiers, who was criticised for picking and choosing international assignments after announcing his retirement last year, as the “most honest and committed” person.Also Read - ENG vs IND 2021: 4 Milestones Which Virat Kohli Can Achieve in Upcoming Five-Match Test Series

“My brother you are the most honest and committed man I know. It’s been unfortunate to see this happen to you. But know that we stand with you and believe in you. Also Read - ENG vs IND 2021: Virat Kohli And Co. Has Centre Wicket Training Session | See Pics

“Seeing people enter your personal space has been sad to see and uncalled for. More love and power to you and your beautiful family. Me and Anushka are Always here for you guys” Kohli wrote on de Villiers Instagram. Also Read - Harbhajan Singh Makes Big Statement For Suryakumar Yadav, Compares Him With Virat Kohli And Rohit Sharma

In the middle of South Africa’s disastrous World Cup campaign, a media report had claimed that the former Proteas captain had offered to come out of retirement a day before the squad was to be picked for the mega-event but the team management rejected it.

However, de Villiers, in a detailed statement on Friday, finally broke his silence on the controversy surrounding his international comeback, which never happened, saying he did not demand to come out of retirement at the 11th hour before the World Cup but was privately asked whether he was open to play the 50-over showpiece. 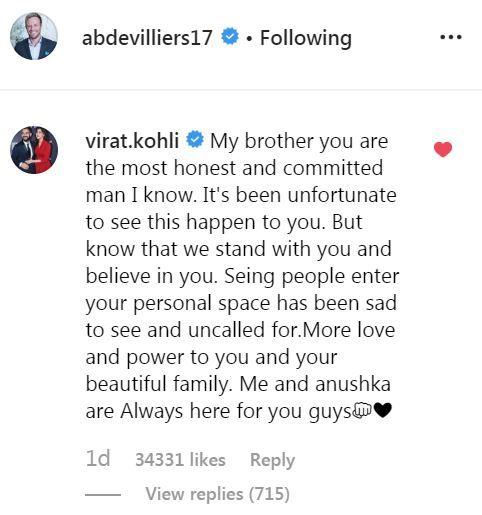 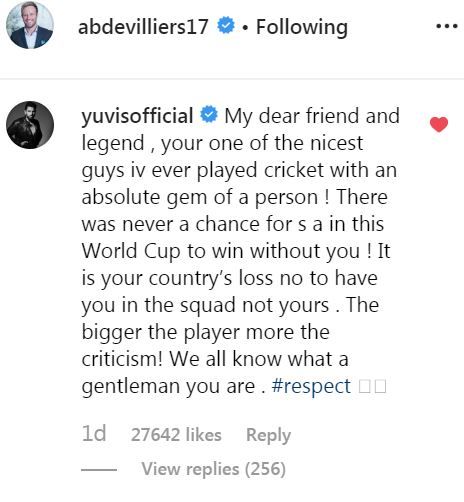 Former India all-rounder Yuvraj Singh also chimed in his support for the 35-year-old on Instagram.

“My dear friend and legend, your one of the nicest guys i’ve ever played cricket with an absolute gem of a person! There was never a chance for SA in this World Cup to win without you! It is your country’s loss not to have you in the squad not yours. The bigger the player more the criticism! We all know what a gentleman you are,” Yuvraj wrote.