Virat Kohli wants to implement MS Dhoni's calm demeanour when he takes the field as skipper. 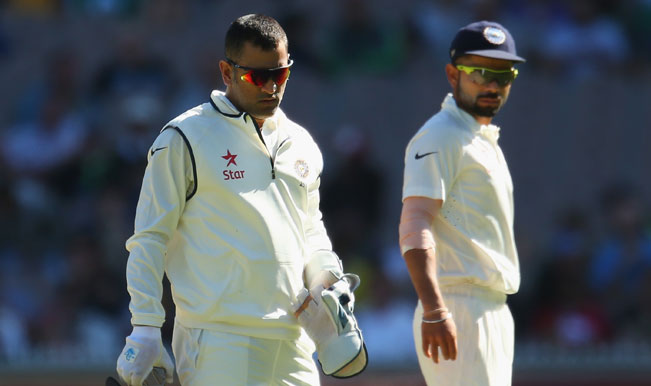 Sydney, Jan 5: Still coming to terms with Mahendra Singh Dhoni‘s shock retirement, new Indian captain Virat Kohli has claimed he is keen to emulate his predecessor by staying calm in tough situations when he leads the side out in the fourth and final cricket Test against Australia starting at the Sydney Cricket Ground (SCG) on Tuesday.

“We were changing and packing up in the dressing room after the Melbourne Test and Dhoni came in and said he wanted to say something. He then announced his decision and we were all taken aback. It was so sudden, totally out of the blue. We didn’t see it coming and it was shocking at that point for us. We didn’t know what to say because it was a very emotional moment for him. For us too, who as youngsters had started under his captaincy, it was a very strange moment,” said Kohli about Dhoni’s Test retirement announcement.

“There is so much to learn from him especially in tough situations, his composure and his decision making at important times. These things are priceless and any captain would love to have them. I hope I can be as calm as him,” he added, while paying rich tribute to his predecessor. Kohli, who was stand-in-captain in the first Test at the Adelaide Oval with Dhoni nursing a finger injury, struck two centuries to scare the hosts only to lose the match by 48 runs but the top-order batsman is ready to learn from his mistakes.

“There were quite a few things from Adelaide that I sat down and analysed which can be improved upon. I have thought about what are the things that I can correct, the mistakes I made in that game. Hopefully I’ll try to make the right decisions in every situation out there in the middle,” said Kohli reflecting on his experience thus far.

“I don’t think there needs to be a major change in our approach. The message was plain and simple in Adelaide – go out there, back yourself, express yourself, play positively and play to win. So, there’s nothing special I need to say again to the boys because everyone is on the same page and you have seen it with the way we have played in this series. We have always looked to be positive. What we could have done better is win those important moments and that’s something I think we need to improve as a Test team,” he added.

The Indian bowlers have also come under the scanner for their inability pick 20 wickets in Australia but Kohli defended their performance.

“Bowling in the right areas is important and that’s where your composure comes in the second or third spells. The guys know that, we just need to give them that breathing space in Test cricket because when you get a combination right and get the guys on the same page, it is a very delightful journey that you enjoy winning situations. The guys are pretty close to that to see that happen sooner than later and in this game. We don’t need to do much different than bowl consistently in the right areas. The fact that they have improved in the MCG Test especially in the second innings when they were tired shows that this can be done,” the 26-year-old continued.

“I am very confident we can take 20 wickets. We need to increase the consistency with which we bowl. If we bowl in good areas, with patience, we have the ability to take 20 wickets. If we believe we can do it. If we can make a good combination we can win and I have full faith in my bowlers,” he explained.

With Mitchell Johnson, who is nursing a hamstring injury, forced to sit out in the final game, Kohli looks back at the on-field aggression between the two players, which he thinks was blown out of proportion.

“It’s surprising that when there are no fines towards one individual from the ICC how can one individual be so wrong for standing up for his team,” replied Kohli when asked about his incident with Johnson in the third Test.

“It is common sense that if you are not fined then you understand what was happening out in the middle and what I was doing was standing up for my team.”

With India left with just one wicketkeeper, Dhoni has been kept on stand-by should Wriddhiman Saha suffer an unexpected injury on the morning of the Test.

“Dhoni is the second keeper in the squad as of now. So God forbid if something happens to Saha on the morning of the match, obviously he will have to step in because I can’t keep wicket,” he clarified over this rather surprising and awkward situation the team finds itself in. However when the match begins tomorrow, all eyes will be on Kohli as Indian cricket will turn a new page but the Delhi boy is ready to handle the pressure.

“I know fully well how much pressure and expectation there will be as Indian captain. And I love my hair and don’t want to lose it. So I will try not to stress myself and enjoy this role. Captaincy is as tough or easy depending on how well your team is playing or how badly. My first aim is to take everyone along as captain and if everyone is working in the same direction, that will be very satisfying. This team is quite exciting and I expect a lot of good things from this team in future,” Kohli signed off.