In his latest video, he is trying to copy actor Akshay Kumar's iconic move in the song 'Bala' from the movie 'Houseful' in 2019.

In a bid to keep himself in high spirits during the lockdown, Australia opener David Warner has taken TikTok by storm.Also Read - T20 World Cup: Not Just Virat Kohli Captaining For Last Time, Also About Winning the Tournament, Says Gautam Gambhir

In a matter of a month, he has become a star on the social media platform, thanks to his hilarious videos. His acts are loved by his fans in the country – as he enacts Indian dialogues of superstars. Also Read - Katrina Kaif Oozes Beauty in a White Bodycon Dress, Worth Rs 48K

In his latest video, he is trying to copy actor Akshay Kumar’s iconic move in the song ‘Bala’ from the movie ‘Houseful’ in 2019. Also Read - Ashes 2021: Ian Healy Bats for Usman Khawaja To Open with David Warner

Kohli burst into laughter after watching David Warner’s antics. Kohli commented with as many as 4 laughing emojis on Warner’s ‘Bala’ post. 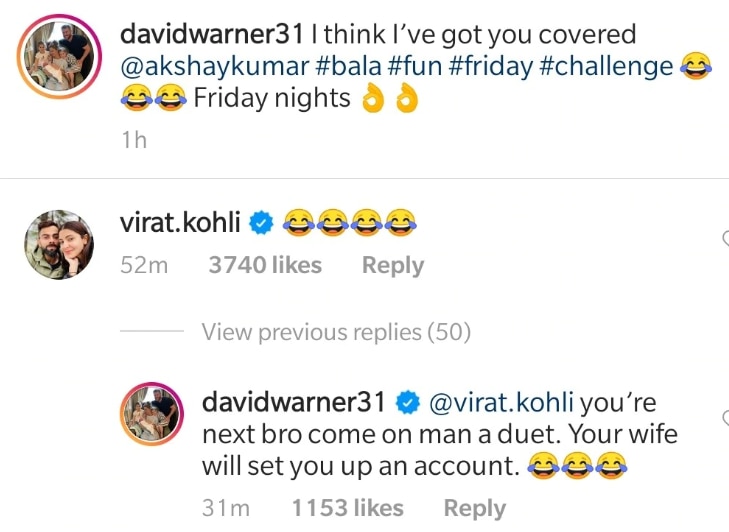 Following Kohli’s laughter, Warner took the opportunity to invite the Indian skipper to the TikTok platform, in fact, he also suggested, his wife Anushka Sharma could set up the system.

Both Kohli and Warner were slated to participate in the cash-rich Indian Premier League, which has now been postponed indefinitely.

From Yuzvendra Chahal to Shikhar Dhawan, cricketers have been lining up to showcase their talents. Few like Rohit Sharma and Kevin Pietersen have even put professional TV presenters to shame by showcasing their interviewing skills.