Ravindra Jadeja was again unconvincing with the bat, leg before wicket to a ball swinging in to him from Anderson. 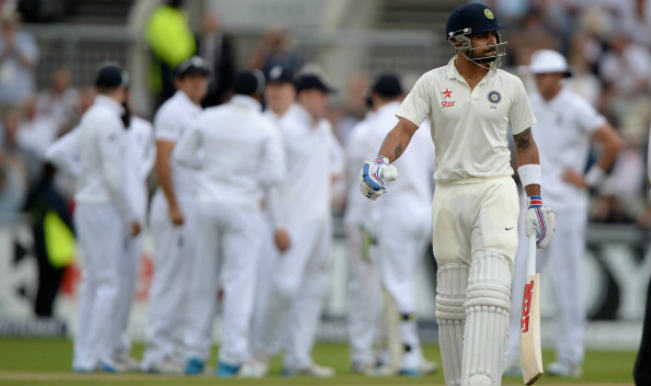 Manchester, Aug 7: It can be debated whether India should have fielded first on a fast, drying pitch under heavy cloud cover in the fourth Test against England that got underway here Thursday at the Old Trafford. But while it was going to be tough in the first three hours, it was really the Indian batsmen’s inadequate technique that let down the tourists in their first innings on the opening day of the fourth Test match against England. They were bundled out for 152 after at one point being a humiliating eight for four. Also Read - Not Far From Achieving my Dream of Becoming MMA World Champion: Ritu Phogat

By recalling Ravichandran Ashwin and thereby selecting two spinners in the XI, India were virtually committed to batting first. It was, therefore, a matter of weathering the storm in the first session and a half. In this, the Indians failed miserably. Gautam Gambhir, replacing Shikhar Dhawan at the top of the order, was fortunate to receive a couple of juicy deliveries on leg stump, which assisted him to get off the mark. The first testing ball he got undid him. Instead of pushing straight at one leaving him from Stuart Broad, he aimed to turn it to mid-on. Wrong shot; first success for England. Also Read - India vs Australia 2020: Virat Kohli And Co. Allowed to Train in Quarantine by NSW Government

Playing at home, James Anderson was in peak nick swinging the leather both ways at above 85 miles per hour. His angled in delivery heading for or just outside off-stump, which ultimately swings away isn’t easy to negotiate. It was precisely with such a ball that he had the in-form Murali Vijay caught at first slip.

And he struck again to dismiss Virat Kohli, who has become a bit of a bunny for the Lancastrian. In this case, the line of the ball was wider of the off-stump and so the batsman could have left it alone. But Kohli’s open-chested – as opposed to a side on – approach has made him vulnerable to a well directed out-swinger. He needs to quickly correct this lacuna if he’s to fulfill his promise.

Cheteshwar Pujara and Ajinkya Rahane were equally guilty of lapses in technique. The former drove at Broad without moving his front foot to the pitch of the ball and was consumed in the slips. Modern batsmen tend to push or half drive at balls they should be meeting with a dead bat in the early part of their innings. You expect the Saurashtrian to be an exception; in this instance he wasn’t.

Mumbai’s Rahane has looked impressive every time he’s come out to bat. This time, too, he steered India to 62, mostly middling the ball, before he chased a ball from Chris Jordan to become Engand’s fifth victim. Having done the hard work and with the track easing, the ball softening and the bowlers no longer fresh, he needed to drop anchor and make it count. He didn’t, consequently adding to India’s woes.

In contrast, what he lacks in terms of technical excellence, India’s captain Mahendra Singh Dhoni compensates with a sound temperament. He played and missed, but remained patient. With his unorthodox, bottom hand and cat-and-mouse style, anything pitched up, he stepped out to drive powerfully. In so doing, he forced the bowlers to pitch short, which plays into his hands.

Dhoni bravely took blows on his body, one ball hit his helmet; but as he grew in confidence, he did not spare the shorter ball, despatching them with hooks and pulls. His 71 – before he was out hooking, not unjustifiably – saved further blushes.

Ravindra Jadeja was again unconvincing with the bat, leg before wicket to a ball swinging in to him from Anderson. Admittedly, he is a bowling all-rounder; but he has given no indication of being able to spin the ball other than out of a rough. There is no room for a bits-and-pieces player in test cricket.

As Ashwin, in a 66-run stand with Dhoni demonstrated, if you apply yourself, runs can be accumulated when conditions are easier for batting – as they became from the fourth hour of play. But having batted in such an accomplished fashion, he crucially could not resist a hook.

However, those were days of uncovered surfaces and un-helmeted and financially unrewarded batsmen facing genuine fast bowling. There is less of an excuse in an era of pitches protected for batsmen and when Indian cricketers are the highest paid in the world.