India skipper Virat Kohli gestured towards fans while the two-minute silence for the Pulwama martyrs was on at Vizag.

India skipper Virat Kohli gestured towards fans while the two-minute silence for the Pulwama martyrs was on at Vizag. Kohli put his finger in his mouth urging fans to keep quiet for the moment. It was a gesture that is bound to win hearts, just to see the person you admire respects the country and its soldiers so much is extremely inspiring. The attack on February 14 was one of the deadliest on Indian jawans, it killed 40 CRPF jawans and shook the entire nation. Pakistan-sheltered Jaish-e-Mohammed took responsibility for carrying out the dastardly strike.Also Read - IND Tour of ZIM: KL Rahul & Co. Leave For Zimbabwe For ODIs ; Check VIRAL Pics

Kohli has been vocal about the issue and has already condemned the episode. Also Read - Shikhar Dhawan: My Focus Is On 2023 ODI World Cup, Want To Play All Possible Matches

Here is the picture of Kohli signaling towards the fans at Vizag: Also Read - Sanjay Manjrekar Opens up on Virat Kohli Embracing 'New Style'; Says He Didn't Care About Runs or Getting Out 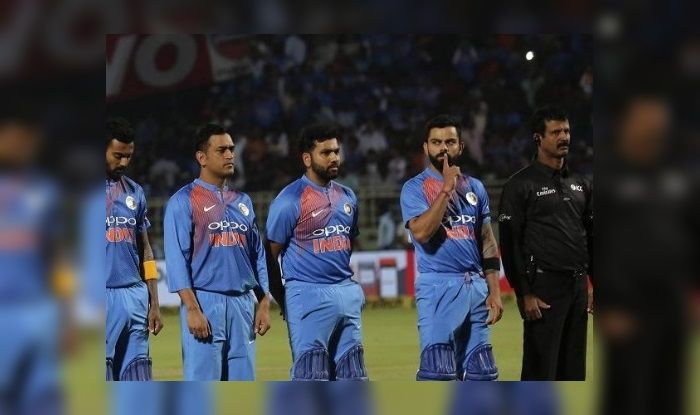 Meanwhile, the Men in Blue lost the match in a last-ball finish. Australia won the match by three wickets. Umesh Yadav’s death bowling went for a toss as he undid all the good work done by fellow teammate Jasprit Bumrah as Australia edged out India by three wickets to win a last-ball thriller in the first T20 International on Sunday. With 14 required off the last over, Umesh was hit for a boundary each by Jhye Richardson and Pat Cummins, who had identical scores of 7 not out as they reached the target of 127 off the last delivery of the match.

“We want to give Rahul and Rishab more game-time. Rahul played a really good knock and we had a good partnership. Had we gone on, we could have got 150, which would have been a match-winning score on this pitch. But Australia played better cricket overall and deserved to win,” Kohli said at the post-match presentation ceremony.

“Very pleased with the bowling effort. Never thought we would be in this situation but Bumrah can do wonders when the ball is reversing. Even Mayank (Markande) bowled brilliantly (17th over), I thought,” said Kohli.