Time and again, Kohli's diet has held the attention of his fans.

Virat Kohli is one of the fittest modern cricketers, if not the fittest. But things were not always the same for the Delhi-born cricketer. Things took a turn in 2013 when Kohli took to fitness seriously and the transformation is quite evident.Also Read - Virat Kohli Could be 'Removed as RCB Captain Mid-Way' Through IPL 2021: Ex-India Cricketer

Time and again, Kohli’s diet has held the attention of his fans. By his own admission, Kohli would love to gorge on Chole Bhature’s and Aloo Paratha’s – also his fondness for ‘aloo’ is no secret. But now, things have changed and the Indian captain is very particular about what he consumes. Also Read - Virat Kohli Will Continue to Play With The Same Intensity: Ajit Agarkar

Kohli, who is currently in the United Kingdom, surprised his fans on Friday night as he took to Instagram and shared a story. It was an old love letter that he posted. In the letter, Kohli writes to ‘Aloo’ – that is potato. Also Read - Virat Kohli Gives Motivational Talk After Thumping Loss vs KKR, Video Goes Viral | WATCH

In the letter that Virat shared on his stories, he wrote, “My dear Potato, I am writing this letter to you because I have realized that my love is true for you. I still remember our first meeting. The day I saw you in potato paratha. I still remember that I used to bring you to the grocery store as a true fan. I remember the day when I used to meet you in the theater and used to hold you in my hand and you were covered in red ketchup.”

Here is the picture: 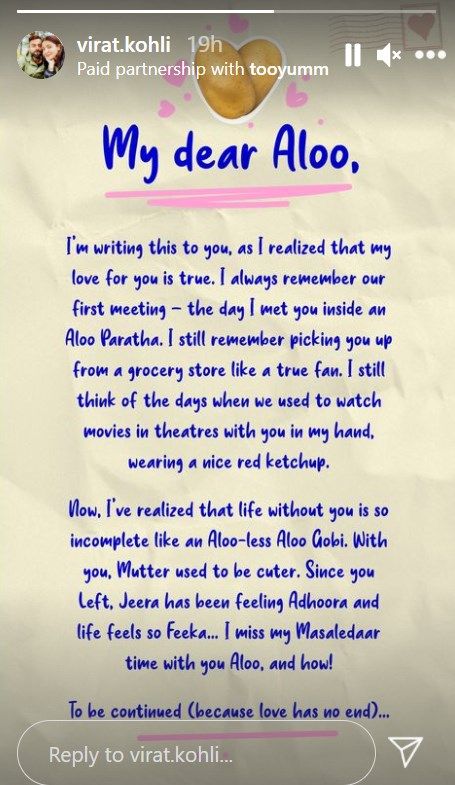 Kohli, who is in England, would be the key to India’s chances in the upcoming World Test Championship final against New Zealand. The Indian captain dod some batting on Friday during an intra-squad game in Southampton just to get rid of the rustiness of the quarantine and get into the groove.