Two of the fittest cricketers in Indian cricket team – Virat Kohli and Ravindra Jadeja are always known to push the bar high with their unmatched intensity and passion in the cricket field. From running those quick singles or doubles to inflicting those jaw-dropping run-outs, both Jadeja and Kohli are a treat (on-field) for every cricket lover. Also Read - IND vs ENG: 'Wicket-Taker' Ravichandran Ashwin Should be Included in India's ODI Squad, Says Brad Hogg

If the India skipper is credited to inculcate a new fitness culture within the team ever since he has been at the helm. It is Jadeja who has often been hailed from experts and fans alike for setting the bar high. Also Read - Virat Kohli Becomes First Indian to Breach 100-Million Followers Mark on Instagram

On Monday, the 31-year-old Kohli made a big claim and admitted that it is almost impossible for him to outrun the speedy all-rounder during the group conditioning sessions. Also Read - PSL 2021: Fawad Ahmed of Islamabad United Tests Positive For COVID-19, PSL Match Delayed For Two Hours

Taking to Twitter, Kohli shared a picture of him running alongside Rishabh Pant and Jadeja during a practice session. “Love group conditioning sessions. And when Jaddu is in the group, it’s almost impossible to outrun him,” the Indian skipper tweeted tagging Pant and Jadeja.

Love group conditioning sessions. And when Jaddu is in the group, it’s almost impossible to outrun him 😃👌. @rishabpant @royalnavghan

Replying to captain’s post on social media, Jadeja wasted no time in acknowledging the praise. He replied back: “Hahah I enjoyed too”.

On Sunday, India won their first-ever Pink-Ball Test, defeating Bangladesh by an innings and 46 runs to clinch the two-match series 2-0. In the process, India also became the first side in the world to register four consecutive innings win in Test cricket. 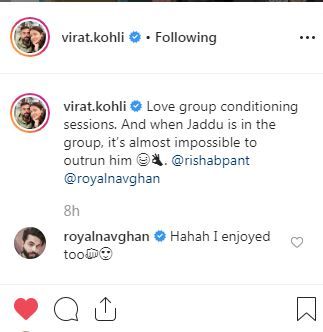 Courtesy the clean sweep, India have consolidated their position at the top of the ICC World Test Championship. They have accumulated 360 points after the completion of seven matches.

India are yet to drop a point in the nine-team championship. They won 2-0 in the West Indies and defeated South Africa 3-0 in a home series before completing their third series win in Kolkata.

The Men in Blue will next face West Indies in the three-match T20I series beginning December 6 in Hyderabad.