Virat and Anushka's selfie is going viral on the internet, and as always netizens can't stop gushing at how cute the two are looking.

After registering a historic triumph against Australia in Tests and ODIs, India captain Virat Kohli takes his wife Anushka Sharma for a special date. Enjoying some time off from their busy schedules, both Kohli and Anushka were caught rooting for tennis legend Serena Williams, who was playing against Ukraine’s Dayana Yastremska in the third round match of Australian Open 2019. Smitten by Williams’ brilliance, Kohli and Anushka shared an adorable selfie which is going viral on the internet, and as always netizens can’t stop gushing about the duo.Also Read - Virat Kohli to KS Bharat; Big Takeaways For India From Warm-up Game Ahead of England Test

Earlier as well, Anushka was seen cheering for his champion husband from the stands during India’s long tour to Australia. Their adorable pictures and videos from their Australia tour were already viral on the internet. Also Read - Virat Kohli Will Score Big Runs - Virender Sehwag PREDICTS Ahead of 5th Test vs England at Edgbaston 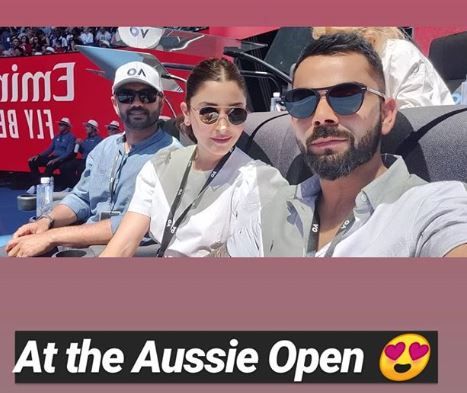 On Friday, the Bollywood starlet Anushka wished the Indian cricket team on their first bilateral ODI series win over Australia. She also congratulated her husband and Team India captain Virat Kohli for the feat. With series levelled at 1-1, leg-spinner Yuzvendra Chahal and veteran ace MS Dhoni starred in the final ODI to take India to a memorable series triumph at the iconic MCG.

“What an unforgettable & outstanding tour it’s been !! Happy to have witnessed the historic victories by the men HUGE congratulations And so proud of you my love @virat.kohli,” she captioned a picture of the team as they lifted the cup after the win. India registered a seven-wicket win over Australia in the third one-day cricket international and a 2-1 series win on Friday.

What an unforgettable & outstanding tour it’s been !! Happy to have witnessed the historic victories by the men 👏 🙏 👏 HUGE congratulations 🇮🇳 And so proud of you my love @imVkohli ❤️ 😁 pic.twitter.com/QdAdN9OFaz

She has also shared her congratulations for the team when they won the test series recently. “They came. They conquered !! History written and created by this bunch !! Huge congratulations to all players, coaching unit and support staff; it takes undying perseverance & solid conviction to focus on what’s important and shut out the rest. So so happy and proud of you my love @virat.kohli,” she had captioned a photo album of the team from the tour.