With the Premier Futsal league 2016 kickstarting soon we will get to see for the first time musical maestro AR Rahman and India Test captain Virat Kohli coming together to work on the league’s official anthem! Yes, for the first time ever Virat Kohli would be lending his voice to the song composed by Oscar Award-winning Rahman.Also Read - BCCI Selectors in Dilemma Over Rohit Sharma or Virat Kohli as ODI Captain For South Africa Tour: Report

Both Rahman and Kohli are equally excited to be working with each other. The Music maestro said, “I’m especially excited to work with Virat Kohli on this, let’s hope he is as good with his melody as he is with his bat!” Kohli who is the Premier Futsal league ambassador will lend his voice to the anthem of Premier Futsal titled ‘Naam hai Futsal’. Also Read - Aakash Chopra on India Having Two Different Captains in Virat Kohli, Rohit Sharma For South Africa Tour, Would be a Challenge For Rahul Dravid

Virat Kohli shared his enthusiasm about working with A R Rahman with a picture on his official Facebook account. The picture has the two personalities posing in the studio with a caption shared by Kohli that reads: What an honour to have spent some time with this legend today. Genius at work, epitome of humility. Thank you mr rahman for all the great memories and the songs you’ve given to this nation. #legend#respect. Also Read - Virat Kohli Worships Test Cricket Even With the Amount Of ODI Cricket India Plays, Then IPL: Ravi Shastri 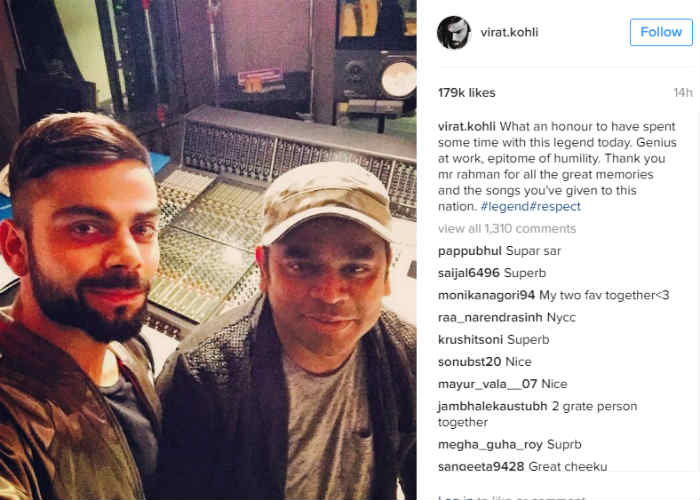 A R Rahman revealed that Virat  will be seen rapping in the major portions of the song. It will be nothing but amazing to see the Indian cricketer rap for the The music video of the Premier Futsal anthem featuring Kohli will be released on June 20, 2016 ahead of the Premier Futsal launch on July 15, 2016. (ALSO READ: Flavour of the season Virat Kohli scorches the cover of GQ magazine).