She feels her to-be-husband aced it and was better than Kohli.

After the hop push-up challenge started by India allrounder Hardik Pandya took social media by storm, skipper Virat Kohli came up with a twist to that and then asked the former to come up with something better.Also Read - I Think India Can Pick Two More Teams And Win Any Tournament in World: Hardik Pandya

Hardik instantly obliged and gave another twist to it. Now, Hardik’s wife Natasa Stankovic has come up with a clear winner. She feels her to-be-husband aced it and was better than Kohli. Also Read - Bhuvneshwar Kumar Could Join Virat Kohli-Led Team India For England Tests as BCCI Contemplates Sending Injury Replacements: Report

Announcing the winner of the challenge, she wrote: “My bebu the best.” Also Read - Sachin Tendulkar or Virat Kohli? Ex-Pakistan Pacer Shoaib Akhtar Picks Who is Better

Hey bruh @virat.kohli Always got your back 😉 @rahulkl @krunalpandya_official guys would you like to have a go ✅🔑 and special thanks to my darling @coach_a.i.harrsha for pushing me ✅ 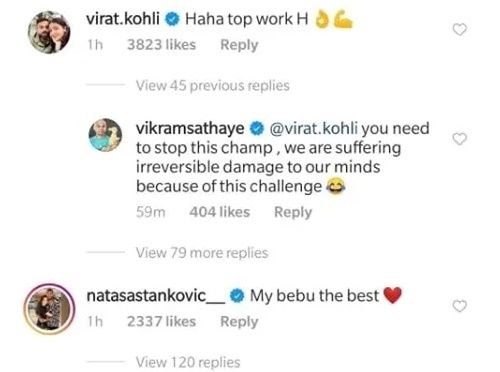 Meanwhile, with no international cricket happening, cricketers are finding unique ways to keep themselves busy and in a good frame of mind during the testing times.

It is uncertain if the cash-rich Indian Premier League will take place this year, but BCCI has not called it off completely as reports suggest they are contemplating going ahead with the tournament in an overseas country and Sri Lanka and UAE is being looked at as options.