Kohli after being rested for the Asia Cup will return to lead the Indian side in the upcoming home series against West Indies. Now, the website seems to be working fine at the time the copy was filed.

It seems India’s win over Bangladesh in the Asia Cup 2018 finals did not go down well with Bangladeshi fans who hacked India captain Virat Kohli’s website and posted a message there. Litton Das’s brilliant ton was nullified by the Indian batsmen who took India over the line of the last ball. But it seems the decision of Litton Das’ stumping decision irked the emotional fans from Bangladesh. It was a decision which probably changed the course of the match, till then Bangladesh were going great guns. Fans felt it was unfair to give him out as there was enough doubt over the decision as replays showed, maybe, just maybe some part of the foot is behind the line. But in cricket, the umpire has the last say and one must take it in their stride and move on.Also Read - Virat Kohli-Anushka Sharma's Fans Begin Meme-Fest to Criticise Broadcaster After Vamika's First Pics go Viral

But then why hack Kohli’s website when he was not even part of the squad. India was led by Rohit Sharma. Also Read - India vs South Africa: Twitter Reacts After KL Rahul-Led Team Fails To Avoid 3-0 Whitewash Against Proteas

“Dear ICC, Didn’t Cricket use to be a gentlemen’s game? Shouldn’t every team have fair rights? Please explain how it was out? If you don’t officially apologize to the whole world and take actions against the umpire then get ready to be hacked every single time you recover the site,” read the message from the hackers. Also Read - Ravi Shastri on Virat Kohli Stepping Down as Test Captain - 'Could Have Carried on For Two More Years'

“And my fellow Indian brothers and sisters, We mean no disrespect to you guys. Please think about it. How would you feel if injustice was done with your team? Every single national team should be treated equally in the game,” the hackers further wrote.

Here is a screenshot of hackers message. 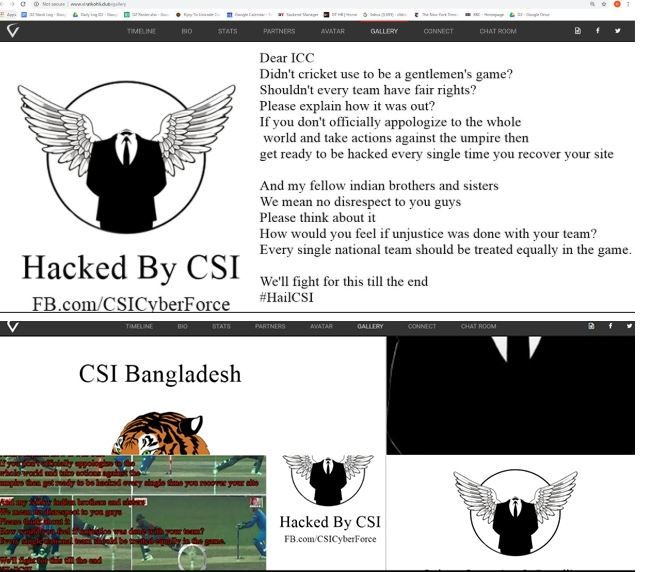 Kohli after being rested for the Asia Cup will return to lead the Indian side in the upcoming home series against West Indies. Now, the website seems to be working fine at the time the copy was filed.