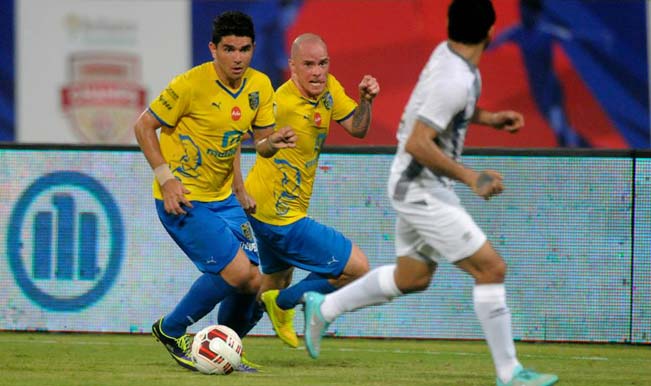 Chennaiyin FC travel across the border to take on state rivals Kerala Blasters FC in the 45th Indian Super League (ISL) 2014 match at the Jawaharlal Nehru Stadium in Kochi on Sunday. The kick-off is set for 7:00 pm IST and live coverage will be on Star Sports 2, Star Sports 3, Star Sports HD 2 and Star Gold. You can also watch the match online through the live streaming services provided by Star Sports’ official website. Also Read - East Bengal Head Coach Robbie Fowler Promises to Treat Each Player Equally

We are all poised for an exhilarating second South Indian derby between Chennaiyin FC and Kerala Blasters FC. The two sides met very early in the tournament under very different circumstances and Marco Materazzi’s side managed to win it 2-1 including Bernard Mendy’s acrobatic bicycle effort that decided the outcome of the match. Also Read - ISL 2020-21: Jamshedpur FC Sign Seasoned Goalkeeper TP Rehenesh

This time things are a lot different in either camps. The Chennai outfit will be without Elano, Mikael Silvestre, Bojan Djordjic and have also lost John Mendoza for the rest of the tournament. The Blasters have an injury concern in David James but has a fully fit squad to choose from. A win for Chennaiyin FC will extend their lead on top of the table by five points; also sealing their place in the semi-final.

KBFC are unbeaten at home this season and are eyeing their second straight victory in front of their home supporters that will take them to second place in the ISL table.