We may not be in a position to confirm anything but one thing that can easily be confirmed is the fact that KL Rahul is a serious hit among the female fraternity.

It seems star Indian batsman KL Rahul is having the time of his life, be it on-the-field or off-it! Also Read - Nora Fatehi is a Queen of Elegance and Grace in a Blush Pink Kaftan- See VIRAL Pics

Kings XI Punjab’s opener KL Rahul was recently spotted outside a Mumbai eatery with a female friend, and as expected that set the rumour mills on fire. He was apparently seen hanging out with Bollywood actress Niddhi Agerwal. Shutterbugs were at their best as they captured the two together and that has become the talking point. So let us address the elephant in the room without wasting any time, is KL Rahul seeing the tinsel town actress? We cannot confirm anything as of now. Also Read - Hina Khan Shares Heart-warming Video Depicting Her 12 Years of Glorious Journey, Says 'Fans Make It Worthwhile'

Today, KL Rahul is being touted as the next big thing in Indian cricket and there are reasons for it. In the 14 matches he played in IPL 2018, he scored a whopping 659 runs at a surreal average of 54.91 (Surreal in T20’s). He seems to be also garnering all the ladies adulation since Virat Kohli got married. Also Read - Sonakshi Sinha Paints The Town Yellow in an Embroidered Cape Set from the Shelves of Arpita Mehta Worth Rs 39K

On the other hand, Niddhi Agerwal who made her Bollywood debut opposite Tiger Shroff in 2017-film Munna Michael is known for her great fashion sense. She did not let her guard down with Rahul it seems, she was dressed to the tee for the dinner-date with KL Rahul. She was sporting a floral crop-top teamed with blue ripped jeans. She was looking oh-so-fashionable!

Here are some of the pictures from the memorable night. 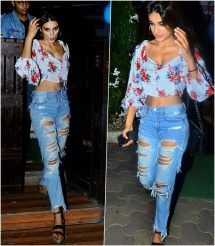 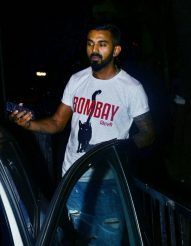 KL Rahul at his stylish best!

We may not be in a position to confirm anything but one thing that can easily be confirmed is the fact that KL Rahul is a serious hit among the female fraternity. Thanks to a great IPL season, KL Rahul is in all probability going to push his case to cement his place in the national squad, something that has eluded him thus far.