World Chess Championship: Viswanathan Anand has to strike soon to catch up with Magnus Carlsen

With the 12-round match nearing the closing stages, Anand's fans here have one question that is bugging their minds. 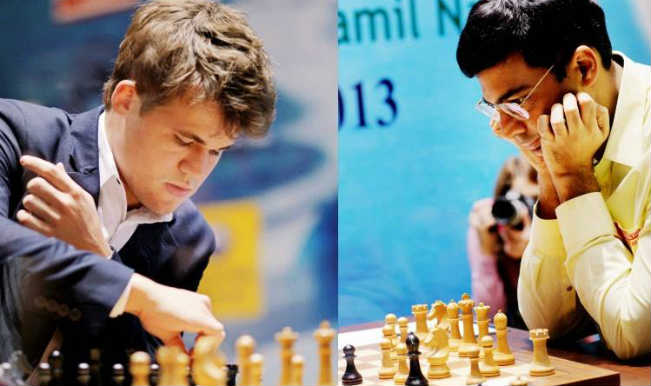 Chennai, Nov 19: The 2014 World Chess Championship is poised interestingly, as the title challenger from India, Viswanathan Anand, has to take some risk to strike soon to be in contention for the crown with Norwegian world champion Magnus Carlsen enjoying a one-point lead, say experts. Also Read - Legends of Chess: Viswanathan Anand Loses to Ding Liren, Slumps to Seventh Defeat

With the 12-round match nearing the closing stages, Anand’s fans here have one question that is bugging their minds. Would Anand, the Indian king of 64 squares, be able to square off the points with Carlsen first and outsmart him later to bring home the title to the country of the game’s birth? Also Read - Legends Of Chess: Viswanathan Anand Snaps String of Successive Defeats to Register First Win

At the end of the eighth round, Carlsen leads the table with 4.5 points to Anand’s 3.5 points. The first player to score 6.5 points will be crowned the new world chess champion. At this juncture, it seems to be a difficult task but not an impossible one for Anand, experts told IANS.

“Unless Anand can steer the next four games towards the type of positions he is comfortable with, he has little chance to come back,” Susan Polgar, a four-time women’s world chess champion, told IANS. According to her, this edition of the world title match is much more closer than its previous edition played between the same players in 2013 at Chennai.

“It is more exciting. When Anand played his type of game, he did good. But when he allowed Magnus to get dry positions, Anand got in trouble. This is why opening choices is very important for Anand,” Polgar said. “Carlsen has the advantage of being one point up and only four games to be played. The last two games went in favour of Carlsen,” World No.26 and Indian Grandmaster P. Harikrishna told IANS.

“His (Carlsen’s) opening preparation in both games was good and he achieved equality with black in game eight quite easily and got serious chances of winning in game seven,” Harikrishna said. According to him, Carlsen would try for a win with white pieces and a draw playing black.

“As for Anand, he has to take risk with white in game 10. However he should play steady chess. I don’t think Carlsen would take risks at this stage,” Harikrishna said. Polgar does not predict any change in Carlsen’s playing style and would try to squeeze as usual.

“I expect Anand to play more aggressively, especially with his two remaining white games. But he has to hold with black. I believe that he will not gamble or go all out in risky fashion until it is absolutely needed as one more loss and the match is basically over,” Polgar said.

Stressing that Anand and Carlsen are great champions, Polgar hoped their fans would give them proper respect whether they win or lose the match. “They are trying their best under immense pressure. I have been in their shoes when I played in my own world championship match so I can sympathise with them. Therefore, it is disappointing for me to see some fans insulted these champions,” she said.

“It is easy when you are sitting at home with computer engines running. It is very different when you are playing in a world championship where each move of yours is being dissected and scrutinised by millions of fans. So be kind to these champions,” Polgar urged fans.