According to experts Carlsen might wilt playing under pressure and cite his last round loss in the 2013 Candidates tournament. 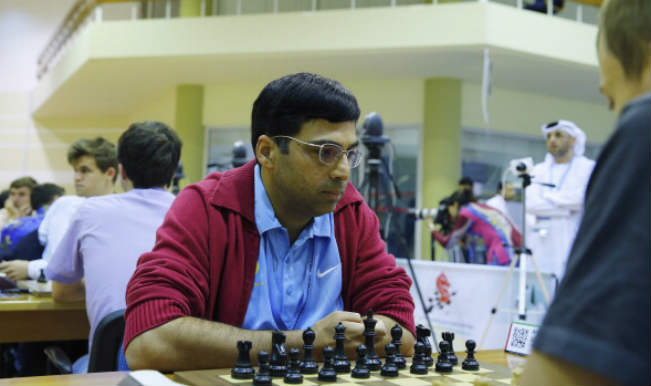 Chennai, Nov 22: In the crucial 11th round game of the World Chess Championship underway in Sochi, Russia, Indian ace Viswanathan Anand has to hold out Sunday to mount a serious attack in his last game against Norwegian champion Magnus Carlsen to equalise first and take a shot at the title in the tie-breaker, say experts. Also Read - Legends of Chess: Viswanathan Anand Loses to Ding Liren, Slumps to Seventh Defeat

While experts do not term Sunday’s round as a battle of nerves, they agree that Anand has to hold his nerve to fend off any aggressive attacks by Carlsen playing white. Needing just a point – one win or two draws – from the next two rounds, Carlsen is currently in the driver’s seat leading the table with 5.5 points to Anand’s 4.5. The first player to score 6.5 will be crowned World Champion. Also Read - Legends Of Chess: Viswanathan Anand Snaps String of Successive Defeats to Register First Win

Experts are of the view that the dice is not heavily loaded in favour of Carlsen and there is a good possibility of Anand equalising the score and going for the tie- breaker. But the equaliser is expected to happen from Anand’s side only in the final and 12th round when he plays with white pieces.

In the 11th round Sunday, Anand is expected to play it safe and settle for a draw.

“Looking at the previous games Anand’s play with black pieces was not solid. It is important for him to get a good position in the opening stages of the game tomorrow. Very rarely a player with black pieces has won in World Championships,” World No.26 and Indian Grandmaster P. Harikrishna told IANS Saturday.

Agreeing that Anand has not been able to breach Carlsen’s defence with white pieces – except in the third round which he won – Harikrishna said the champion will be under pressure to fend off an aggressive attack by the Indian in the last round if the 11th game ends in a draw. He said the Sunday game will be tough for both players.

According to experts Carlsen might wilt playing under pressure and cite his last round loss in the 2013 Candidates tournament. Speaking to IANS, Grandmaster R.B. Ramesh said: “Anand should not go all out Sunday. After a draw in the next round he will go all out against Carlsen in the last round.”

According to him Carlsen is more under pressure now than Anand.

“But in Russia we are seeing only 80 percent of the original Anand that we know – the one who would take risks, play solid chess. Now Anand is putting Carlsen under initial pressure but later allows him to escape,” Ramesh said.

Grandmaster B. Adhiban told IANS: “As a fan I would like Anand to go all out even in the next game. But as a chess player, I feel Anand would play it safe Sunday and mount an all out attack on Carlsen in the final round.”

International Master Raja Ravi Sekhar told IANS: “I feel it is the age factor playing against Anand now. After three hours of intense calculations, it seems Anand suffers from fatigue. It seems Anand is not trying hard enough to win the match though his performance is much better.”

International chess arbiter R.R. Vasudevan told IANS: “I will still bet my money on Anand. He has to believe that he can defeat Carlsen. As to the quality of Carlsen’s games it can’t be said to be very great.”

FIDE trainer V. Ravichandran told IANS: “I feel the next round will be very interesting with Carlsen opting for an aggressive play so as to finish off the match rather than prolonging the same to 12th round.”