The problem for the two sportspersons finally came to an end when the National Rifle Association of India stepped in. 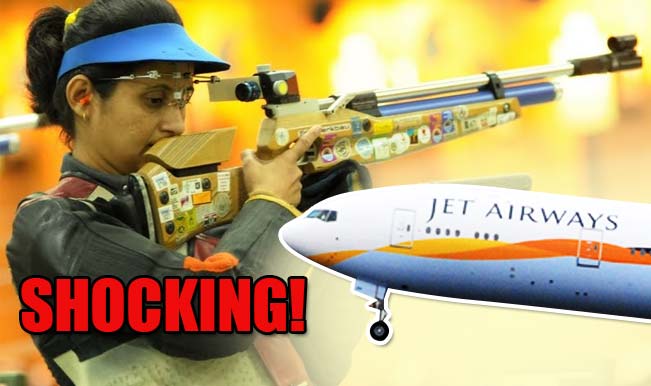 Hearing about misbehaviour and manhandling on the part of some Indian airlines has become so common, it’s passé, but the latest incident by one of the airlines will leave you dumbstruck. Jet Airways, which often finds itself among controversies, did something unimaginable! They stopped the entry of India’s leading shooters Anjali Bhagwat and Heena Sidhu from boarding their flight from Bangkok to Mumbai, according to The Times of India. The reason being that the shooters were carrying firearms in their luggage. It seems Jet ignore the proper clearance papers they had! The ordeal did not end for the ladies, as they had to spend sleepless nights in Bangkok. (Also Read: Airport official arrested for sexually harassing passenger.) Also Read - Bhavesh Shekhawat Secures Maiden Nationals Gold; Vijay Kumar Finishes Fourth

The nightmarish trip for Anjali Bhagwat and Heena Sidhu started when the Jet Airways denied them entry on the connecting flight from Bangkok to Mumbai. The two female shooters were returning from Busan (South Korea) and as per norms, they were issued with a Jet Airways boarding pass in Busan itself. They were still hassled in Bangkok! (Also Read: Air India pilots indulge in verbal duel before flight take off) Also Read - International Shooting Federation Increases Asia's Olympic Quota Places From 38 to 48

As per the TOI report, the two Arjuna Awardees faced difficulties with the uncalled for behaviour of Jet. Heena Sidhu said while talking to TOI, “Despite having all the documents and paying all the fees, Shailesh Gala, the security manager of Jet Airways in Bangkok, didn’t allow us to board the flight. We showed him the DGCA permit and the customs clearance letter but he was adamant and said, ‘I won’t allow you to board the flight’. She further added after arriving Mumbai eight hours late, “I asked him to give this in writing but he refused. We almost missed the Air India flight too because of his attitude.”

Heena was deeply affected with the rude behavior by the Jet Airways official who refused to tell the sportspersons the reasons behind barring them entry into the flight. Anjali and Heena were informed by Korean airline staff that they were not accepted because of the presence of firearms in the luggage. As a result, the girls faced plenty of trouble on the night with no food or sleep at the Bangkok airport.

“It was late in the night and because Jet Airways refused to allow us travel, we had to go out of the airport and take a visa on arrival. We also went without food as the restaurants were all closed. First, we paid the extra baggage charges to Jet and then to Air India and in total we spent about 1700 euros. Add to this the harassment we faced at the hands of that official,” said Heena, further expressing her anger.

The problem for the two sportspersons finally came to an end when the National Rifle Association of India stepped in, after being informed by the former Commonwealth Games medallist Ashok Pandit. (Edited by Shweta Parande)