Chahal-Dhanashree Married | Social media was abuzz as fans and his fellow cricketers started congratulating and wishing the couple.

Once Yuzvendra Chahal shared the picture of his marriage on Tuesday evening, social media was abuzz as fans and his fellow cricketers started congratulating and wishing the couple. The marriage was on the cards but the couple managed to keep the details under the wraps to avoid unnecessary attention during the times of the pandemic. Also Read - Virat Kohli, Sachin Tendulkar Pay Condolences to Hardik And Krunal Pandya After Father's Demise Due to Cardiac Arrest

“22.12.20 We started at “Once Upon A Time” and found “Our Happily Ever After,” coz’ finally, #DhanaSaidYuz for infinity & beyond,” Chahal wrote on Twitter. Along with the caption, he shared a picture from the marriage. Also Read - IND vs AUS 4th Test: Nathan GOAT Lyon Achieves Big Feat in Brisbane, Dismisses Rohit Sharma Most Times in Tests

India cricketer Hardik Pandya was among the first to congratulate Chahal and wishing him all the luck for his new journey. 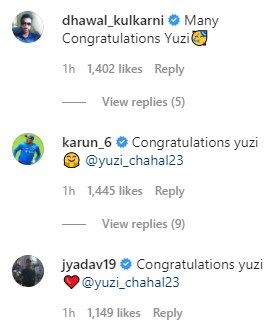 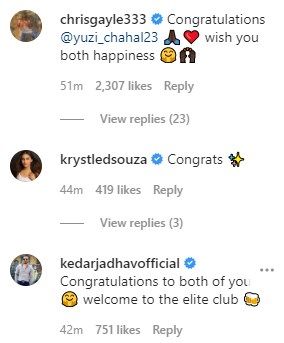 Chahal shared two pictures on Instagram and they were loved by his fans. The couple made their relationship public ahead of the cash-rich Indian Premier League.

According to Verma, their relationship “started off as a student-teacher relationship in April” after Chahal had seen her dance videos on YouTube.”

“During the lockdown, Yuzi decided to learn a few new things, including dance. So, he got in touch with me and we started our classes. Slowly we became friends and sort of felt a connect,” Verma said.

Not just Chahal, all-rounder Hardik Pandya also announced his relationship with Natasa Stankovic earlier in the year, and then they got married during the lockdown and have now become proud parents of a newborn son.

India skipper Virat Kohli on the other hand is going to become a father soon and to attend the birth of his first child has come back to India from Australia tour after the Adelaide Test.