Both Rohit and Chahal are known to share a great on and off-field camaraderie.

Two important cogs of Team India’s limited-overs setup, Rohit Sharma and Yuzvendra Chahal share a great on and off-field camaraderie. Both cricketers are not just the best of friends but also share a close bond between themselves which is beyond the pristine 22-yard strip. Currently involved in the ongoing ICC Cricket World Cup 2019, Rohit and Chahal are leading the Men in Blue with their consistent performances in the showpiece event.

After booking a spot in the semifinals of the World Cup, the mood in Indian cricket team camp is relatively relaxed which is why a few players decided to take a break from the hectic training schedule. Rohit, who is tournament’s leading run-getter with 544 games in 8 matches also decided to take some time off and went for an outing with wife Ritika Sajdeh. Sharing a candid picture of the outing, the stylish India opener shared an Instagram post captioning, “Mood when @ritssajdeh is around”.

Mood when @ritssajdeh is around 👮‍♂️

Sensing the opportunity to take a jibe at Team India’s deputy and his close buddy, Chahal came up with a cheey comment on Rohit’s post. He wrote, “Nice hairstyle bhaiya. Which wax are you using ? @rohitsharma45”. 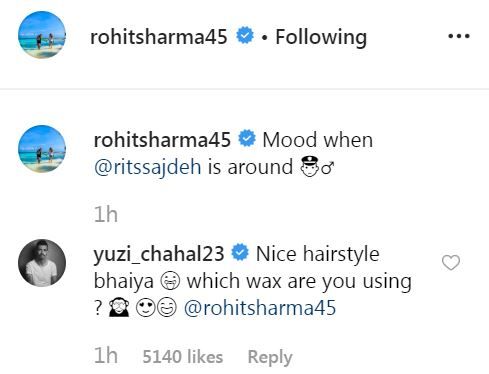 In their last World Cup encounter, India defeated Bangladesh by 28 runs at Edgbaston on Tuesday to qualify for the knockouts. They are currently placed second on the points table, just one point short of defending champions Australia. Both India and Australia have one last match to play in the league stage that will decide their final position.

The table-toppers will take on the team that finishes fourth, either New Zealand or Pakistan, whoever manages a better net run-rate.