Five-time world champion Viswanathan Anand played out a draw with his 2008 challenger Vladimir Kramnik of Russia in the first round of the Zurich Chess Challenge. 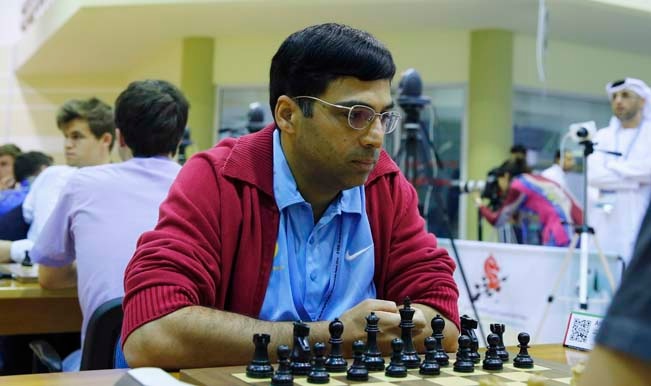 Zurich, Feb 15: Five-time world champion Viswanathan Anand played out a draw with his 2008 challenger Vladimir Kramnik of Russia in the first round of the Zurich Chess Challenge. Playing his first game against Kramnik since December last year, Anand could not do much with white pieces as Kramnik played a variation, which is being revived at the top level after a long time. Also Read - FIDE Chess Olympiad 2020: India Clinch Historic Gold, Russia Declared Joint Winners After Server Malfunction

American Grandmaster Hikaru Nakamura continued from where he had left the Gibraltar International tournament and put it across Fabiano Caruana of Italy. The other game of the day between Levon Aronian of Armenia and Sergey Karjakin of Russia also ended in a draw, making Nakamura an early sole leader. Nakamura moved to two points with his victory, an important one considering that it came with black pieces and against the top rated player in the tournament. Also Read - Legends of Chess: Viswanathan Anand Suffers Eighth Defeat to End Disastrous Campaign

The tournament has a unique points system in place that gives two points in every win in Classical chess and one for a draw. Once the Classical round-robin is over, six players will change gears to the rapid chess with reversed colours and in that each win will only give one point with half a point secured in case of draw. With Nakamura going in front, Anand, Kramnik, Aronian and Karjakin are on one point each, while Caruana is yet to open his account. There are four more Classical rounds remaining.

For many years now, the Queen’s gambit declined with an age old move order has been out of favour in top level chess. However, some recent discoveries have proved that it is worth a try and Kramnik obviously had done the homework when he apparently surprised Anand. There was routine manoeuvring for a long time but Anand could not put any real pressure. The players first negotiated a Queen-less middle game for a long time and then it was time for the pieces to change hands. Soon a minor piece endgame was reached when the draw was signed after 47 moves.

Caruana put pressure on Nakamura for a long time but the latter was quite up to the task in finding out the resources. It was a Sicilian Najdorf, in which Caruana went for a fashionable variation and got a sound positional advantage which he kept intact till move 35. Nakamura had kept the tension running meanwhile and Caruana was the first to crack as he fell prey for some unwarranted tactics. Soon there was attack on the white king and Nakamura finished off the game in style.

Aronian and Karjakin fought it out in a Semi Slav defense game, in which the Armenian was white. Karjakin made an error on the 20th move inviting a piece sacrifice that Aronian duly played but only after a few moves decided to repeat the moves that came as a shocker to those following the game. The Armenian missed out on a nice opportunity as he could have played on with his finely deployed forces.