After Serving Jail Time & Battling COVID, Sasikala Set to Return to Tamil Nadu on Feb 7. Here’s How It Changes Things

"Sasikala will have a bigger role in the formation of the next AIADMK government," Dhinakaran said on Wednesday.

New Delhi/Chennai: Ahead of the upcoming Tamil Nadu Assembly Elections 2021, expelled AIADMK leader VK Sasikala is set to return to the state soon and the course of action she now takes would be keenly watched.Also Read - Jayalalitha's Close Aide Sasikala Freed After Spending 4 Years in Jail, to Remain in Hospital For Now

Sasikala was admitted to the Victoria Hospital after she tested positive for COVID-19 recently while under judicial custody. On the advice of doctors, she remained in the hospital and was discharged on Sunday (January 31) after her latest test reports came negative for COVID-19. Also Read - After Sasikala, Her Cellmate Also Tests Covid Positive

Prison authorities in Bengaluru had formally released her on January 27 after she completed the four-year jail term in a Rs 66 crore disproportionate assets case.

Soon after she was discharged, Sasikala reached a resort near the scenic Nandi Hill at Devanahalli in North Bengaluru.

A huge crowd of her supporters greeted Sasikala as she came out of the hospital. More than 300 policemen were deployed in the area to ensure law and order.

Sambasivan, one of her supporters from Hosur in the border district of Krishnagiri in Tamil Nadu, said this was like a festival for him. 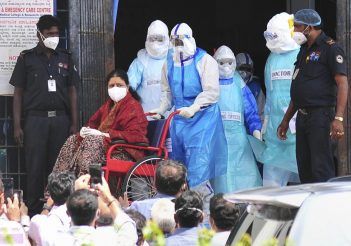 While speaking to reporters in Madurai on Wednesday, Dhinakaran said Sasikala would be given a warm reception at the Tamil Nadu border on February 7.

After returning to Chennai, Dhinakaran said his aunt Sasikala will continue with the legal battle to retrieve the AIADMK and play a larger role in the formation of the next AIADMK government. He said the AMMK party, which was “formed to retrieve AIADMK”, will take forward its task in a democratic way.

When Sasikala got out of the hospital, she hinted at a political battle by sending a strong signal to the AIADMK and travelled in a car that sported AIADMK’s flag.

Political analyst Sumanth Raman tweeted “#Sasikala coming out of hospital in a car with an AIADMK flag on it seems to be a clear signal of her intentions. Game on.”

This made the ruling party questioning the propriety of her action when she had been ousted from the party. The AIADMK has time and again made it clear that Sasikala would not be taken back and her release would not have any impact on the party, which is keen to retain power in the assembly elections, expected in April-May. It has already declared incumbent K Palaniswami as the chief ministerial candidate for the polls.

66-year-old Sasikala Natarajan also known as VK Sasikala was a close aide of late Tamil Nadu Chief Minister J Jayalalithaa. Sasikala was expelled from the All India Anna Dravida Munnetra Kazhagam (AIADMK) party in September 2017 along with her nephew TTV Dhinakaran and others by the general council of the combined AIADMK under the leadership of Palaniswami and his deputy O Panneerselvam after the two merged their respective factions.

Sasikala will have a big role in formation of next TN govt: Dhinakaran

“Sasikala will have a bigger role in the formation of the next AIADMK government,” Dhinakaran said on Wednesday.

He earlier said cases relating to her so-called ‘expulsion’ and connected matters were pending before the court in Tamil Nadu, adding “I have already told you that legal fight will continue (to retrieve the AIADMK).”

The Supreme Court sentenced her to four-year simple imprisonment on February 14, 2017 at a time when she was set to take over as the Chief Minister subsequent to her election as the AIADMK legislature party leader.

After the sentence that also barred her from contesting elections for six years after completion of the term, she chose Palaniswami to be the chief minister.

Before going to Bengaluru to serve the sentence, Sasikala had made a dramatic vow at the ‘samadhi’ of Jayalalithaa, though she did not openly declare what it was all about.

AIADMK calls their claims laughable, says no chance for merger

He said the party decided that late leader ‘Amma’ alone could be the permanent general secretary and reflecting this position, party rules were amended and a new party structure of coordinator, co-coordinator and deputy coordinators was brought in.

“The opinion that Sasikala is the general secretary is expressed out of selfishness. It is not acceptable,” he said. He denounced Sasikala using the party flag in her car and said it was ‘condemnable’ since she was not with the party.

On AMMK’s claim to ‘retrieve’ the AIADMK, Munusamy said Dhinakaran tried his best to ‘capture’ the party but could not succeed.

Such a claim was laughable and aimed at only protecting him, he said adding Dhinakaran was expelled from the party by Amma about a decade ago.

He asserted that there was absolutely no scope for a merger of AMMK with his party since Dhinakaran attempted to destroy the AIADMK and dislodge the government.

If he submitted a letter apologising for such activities, the party top leadership would take a decision on it, he said.