At the strike of November 9 midnight, India woke up searching “How to convert black money into white money” on Google

While the nation was surprised by the immediate move taken by PM Modi and Reserve Bank of India to curb black money hoarding and corruption, the nation was also busy searching "How to convert black money into white money" on Google.

As soon as the clock ticked at 00:00 am on November 9, people in India went into utter chaos and a not so anticipated mess of things. Prime Minister Narendra Modi, when announced of Rs 500 and Rs 1000 shall  not be considered after Tuesday midnight, people were seen rushing to ATM forming hour-long queues. While the nation was surprised by the immediate move taken by PM Modi and Reserve Bank of India to curb black money hoarding and corruption, the nation was also busy searching “How to convert black money into white money” on Google.Also Read - Tokyo Olympics 2020: Twitter Sends Wishes to PV Sindhu as She Faces World No.1 T.Y Tai in Semifinals

The “How to convert black money into white money” query ranked among the top queries on the search engine in India. Surprisingly, state of Gujarat also a home to PM Modi was leading the list followed by Maharashtra and Haryana. Maharashtra capital Mumbai is also India’s financial capital and Haryana being the real-estate hub also includes many controversial property dealing cases. Also Read - Atanu Das vs Takaharu Furukawa Men's 1/8 Eliminations: When And Where to Watch India's Archery Match Online And on TV

The steps taken by PM Modi puts 86 percent of the currency in circulation as illegal tender, making them nothing more than a piece of paper. Circulation of new currency notes have already been started and as we speak they are gradually making their way into the market. The mayhem caused have undoubtedly trickled down to the poor and lower-middle strata of  the country. However, if things pan out effectively the situation will be normal in coming weeks. The move to abolish Rs 500 and Rs 1000 currency is being lauded by citizens across India and it appears as an unanimous support coming together against the corruption, illegal money transactions. Also Read - Attempt to Camouflage Illegal Occupation: India Lodges Strong Protest With Pakistan Over 'Cosmetic' PoK Elections 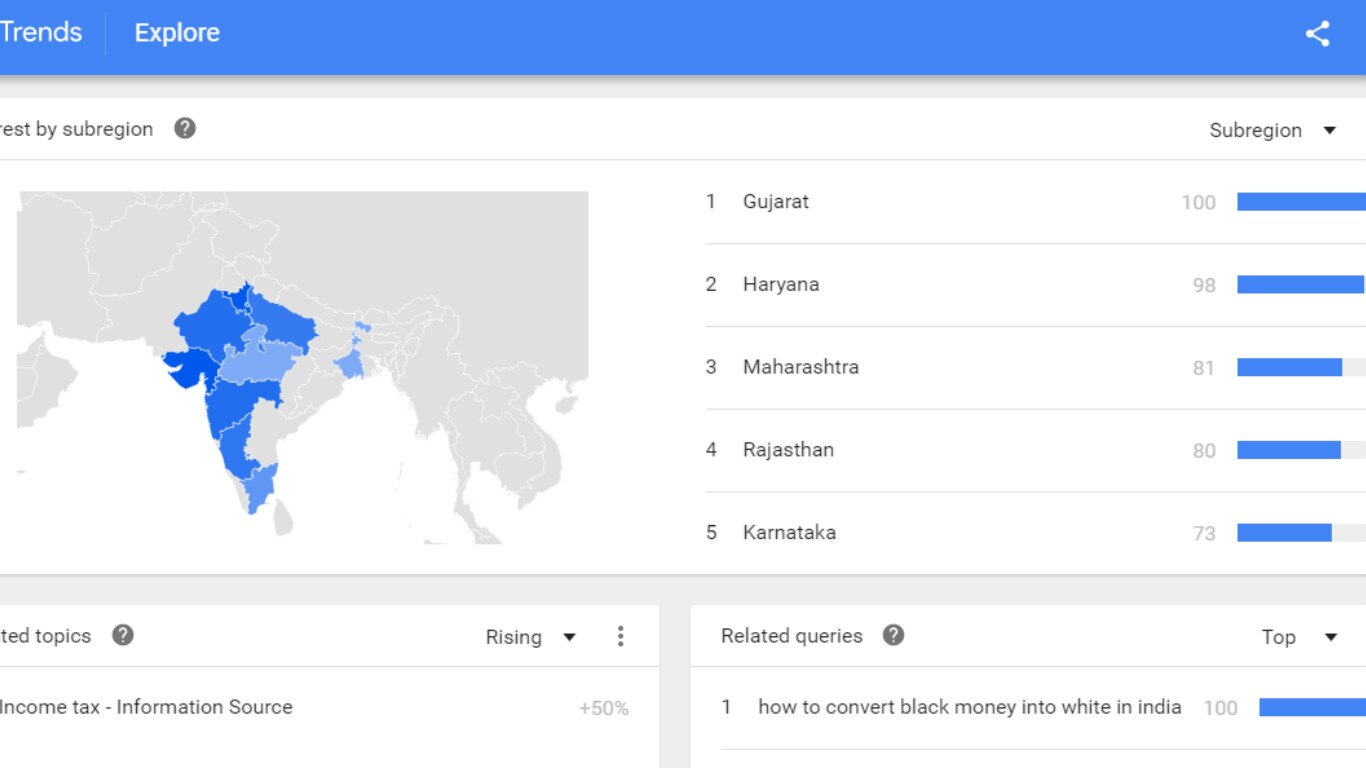 “This one decision will change social culture, in the way people keep money and spend,” Finance Minister Arun Jaitley told reporters on Wednesday as quoted on NDTV. He further adds, “The honest person has the satisfaction to be honest and the not-so-honest worry.”

Though Google has not made any official comments on the query “How to convert black money into white money” ranking in the search. But there were much more query requests made seeking about security and procedures of government plans. Other states which made their way into the list was Punjab, due to hold election next year and Delhi. Things turn very obvious for Punjab as a big chunk of illegal money is bribed to voters at the time of election.