According to IGN India report, the data of Battlegrounds Mobile India is being sent to the Chinese server. The report claims that data from service from Battlegrounds Mobile India is being sent to a Beijing location and the servers are run by Tencent, which is a Chinese multinational company and has ties with Krafton. Along with this, the data of the user’s device is being sent to Tencent’s subsidiary Hong-Kong based company Proxima Beta with Microsoft Assure servers which are in the US, Mumbai, and Moscow. Also Read - PUBG New State Likely to be Released in September, Pre-registration to Begin Next Month | Details Here

IGN report states, “We were able to reproduce these results by installing a data packet sniffer app on our Android phone. This can tell us which servers our device communicates with. We set it to log all servers that Battlegrounds Mobile India would talk to when we play the game. Then we played an entire match. After that, we checked the logs on the packet sniffer.” Also Read - Battlegrounds Mobile India Server Error: How to Fix Busy Server Issue, Restrict Area Code - Deets Inside 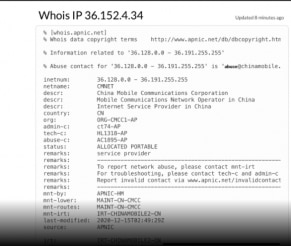 Krafton, the company that developed the new avatar of PUBG, had said before the launch that the game would be operated according to the rules of the Government of India and the privacy of the players would be the company’s priority. Now a new report is claiming that the data of Android users of the game is being sent to servers in China. The report further states –

“A quick whois search for one of the servers spotted in the logs (36.152.4.34 to be precise) revealed that it was run by China Mobile Communications Corporation — a Chinese state-owned company — and the server is located in Beijing, China.”

Last year, the central government banned 117 other Chinese apps, including PUBG Mobile, from being used in India. It was alleged that due to PUBG Mobile, the security and integrity of the country is being damaged. After this, several attempts were made to make a comeback from PUBG Mobile. However, when the ban on the game was not lifted after all the efforts, PUBG Corporation announced to break its partnership with the Chinese company Tencent and announced to bring a separate Battlegrounds Mobile India exclusively for India without the help of the Chinese company independently. did.