Facebook CEO, Mark Zuckerberg‘s Pinterest account has reportedly been hacked by members of OurMine hacking group. This is the same hacking group which earlier this year in June breached their way into Zuckerberg’s Twitter and Pinterest. The group is known for breaching into social accounts of top executives to aware them about security of their social accounts. Claiming the hack in a blog on their website, OurMine wrote, “today our team reached to Mark Zuckerberg accounts again…”. Also Read - Sundar Pichai's Quora account hacked! Not even Google CEO is spared by hackers

The hacking group changed the display name for Zuckerberg’s Pinterest account and the description read, “Don’t worry, we are just testing your security.” OurMine denied revealing details of how they carried hack but made it clear that the hack was not a result of leaked databases. The group did mentioned about Facebook chief’s current Twitter password being the same as his old password for personal Gmail, which Zuckerberg didn’t change even after being alerted by the hacking group previously. However, the group acknowledged Zuckerberg setting up two-level verification on his Twitter account. Also Read - Facebook logo's true meaning will freak you out! 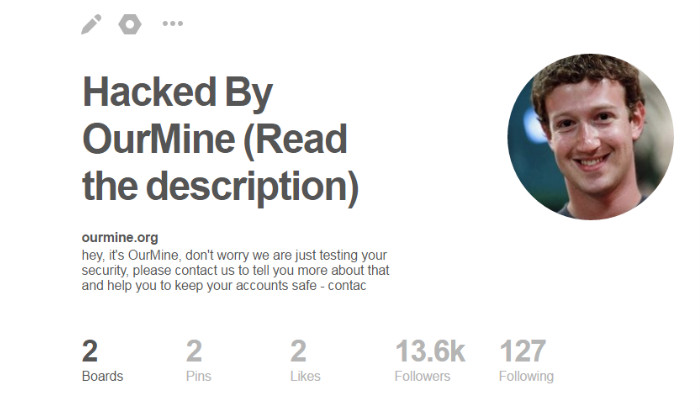 In past, OurMine has hacked into social accounts of Google CEO Sundar Pichai, Uber founder Travis Kalanick, Spotify CEO Daniel Ek and Pokemon Go creator John Hanke. The hackers collective breach into the accounts of top executives and CEOs from Silicon Valley, so that they can be approached by these account holders for advice over the security. ZDnet reports, the last time OurMine claimed a hack, it was called bluff. Thus an official word from Zuckerberg could only clear the air, if the breach has been made into his social accounts.