FAUG Update: From Battle Royal Mode to Guns, These 4 New Game Features Will Be Launched Soon

FAUG Update in India: Some FAUG features were in the trailer but not released in the game on launch day. Here are four new features that are coming soon to FAUG.

FAUG, short for Fearless and United Guards, the new mobile action game by nCore Games which is a rival of the banned PUBG Mobile India, has crossed five million downloads on Google Play Store. The FAUG game was launched by Akshay Kumar just days ago on Republic Day and it has already become the top free game on Google Play.Also Read - FAUG 1.0.0 Becomes Top Free Game on Google Play Store. How to Download it on Android And iOS

Right, FAUG has a story mode with brawler-style gameplay and there are no weapons. The first storyline is based in Ladakh’ Galwan Valley, the site where a fierce standoff took place last year between Indian and Chinese soldiers. Also Read - FAUG Launch: Everything You Need to Know About PUBG Mobile India's Rival; More Than 3 Lakh Downloads on Google Play Store

Many players and reviews are comparing FAUG with battle royale aspects of PUBG Mobile India and other advanced features. However, nCore Games co-founder and CEO Vishal Gonadal has teased that soon players can expect battle royale mode, multi-player mode, guns, and battle pass. Also Read - FAU-G Launched: Why The Indian Game's First Episode is Based in Galwan Valley

Here are the 4 features that are set to launch with future FAUG features:

Putting the FAUG vs PUBG comparisons to rest, Vishal Gondal clarified that the game is not a clone of PUBG. But FAUG will feature a battle royale mode in the future. The nCore Games CEO earlier talked about some FAUG features that were in the trailer but not released in the game on launch day. Right now, the game starts with a story mode that allows single-player and co-operative gameplay only.

“The story mode will be the first one. And then we are hoping that over the period of six to eight months intermediately we will be launching more features and updates,” Vishal Gondal said to IGN India.

A battle royale mode is an online multiplayer video game genre that blends the survival, exploration, and scavenging elements of a survival game with last-man-standing gameplay. Battle royale games like PUBG and Fortnite involve dozens to hundreds of players and they can also play in teams. They start with minimal equipment and then must eliminate all other opponents while avoiding being trapped outside of a shrinking safe area, with the winner being the last player or team alive.

FAUG does not have any guns due to the India-China agreement regarding no guns in Galwan Valley. However, nCore Games does plan to add guns to the game at some point. But guns will not be available in Galwan Valley and will be part of some other map. 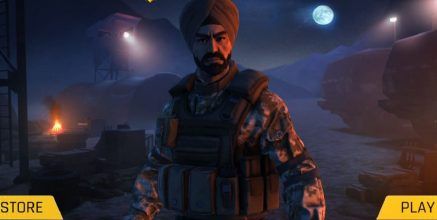 Multiplayer mode is also among some exciting upcoming features in FAUG. nCore Games has confirmed that multiplayer combats are coming soon to the game. It is not clear whether they will be rolled for the Galwan Valley campaigns or restricted to just the battle royale mode.

A battle pass will also be available when FAUG gets an update but it is not there yet. A battle pass is a type of monetisation approach that offers users exclusive rewards like character skins and so on as they reach certain tiers.