Google Will Close This Service on February 24; Here’s How You Can Save Your Data

"On February 24, 2021, we will delete all of your Google Play Music data. This includes your music library with any uploads, purchases, and anything you've added from Google Play Music. After this date, there will be no way to recover it", Google said in the mail.

New Delhi: In an e-mail to its users, Google has apprised them that all of their Google Play Music data will be deleted later this month. This data includes the music library with uploads, purchases, and anything that has been purchased from Google Play Music. The data will be deleted on February 24 and there will be no way to recover it. Also Read - Tony Kakkar's Tera Suit Becomes Top Trending YouTube Video With 7.8 Million Views, Jasmin Bhasin-Aly Goni Fly High

“On February 24, 2021, we will delete all of your Google Play Music data. This includes your music library with any uploads, purchases, and anything you’ve added from Google Play Music. After this date, there will be no way to recover it”, Google said in the mail. Also Read - Watch Tony Kakkar's New Sexist Song - Tera Suit - Starring Jasmin Bhasin And Aly Goni

Notably, the music-streaming platform was officially shut in December 2020. However, it has given its users time until February 24 to download, transfer, or delete their data from Google Play Music, after which it will all be deleted permanently. The tech giant has requested users to transfer to its other music streaming service YouTube Music before February 24. Also Read - International Women's Day: Google Honours History of Firsts Achieved by Women Through Video Doodle 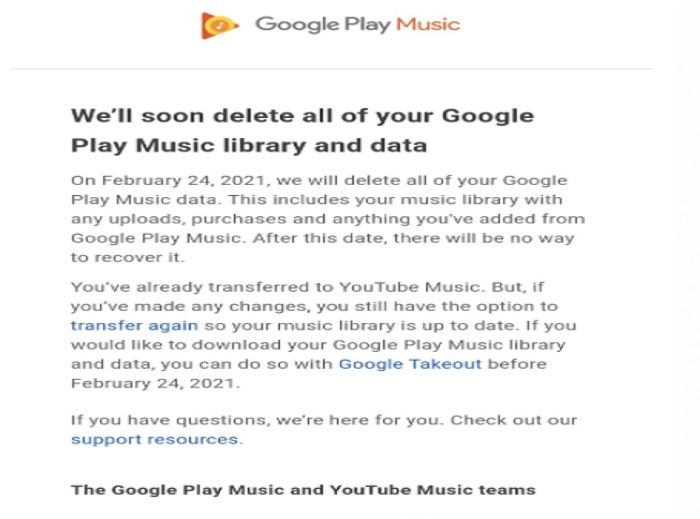 How to Transfer Data From Google Play Music

Step 2: Tap the transfer button at the top of the screen.

Step 4: The transfer could take up to a few hours.

Step 5: Users will get a notification and an email when their music library transfer is complete.

The multinational tech giant is likely to implement its new policy from 1 June 2021, following which speculations are rife that Google may shut the accounts of those users who have been inactive for two years.

Issuing a statement, the company said, “The new policies are for consumer accounts that are either inactive or over their storage limit across Gmail, Drive (including Google Docs, Sheets, Slides, Drawings, Forms and Jamboard files) and/or Photos — to better align with common practices across the industry.”

The simplest way to keep your account active is to periodically visit Gmail, Drive, or Photos on the web or mobile, while signed in and connected to the internet.

The company, however, will notify its users multiple times before attempting to remove any content.