WhatsApp Fact Check: Beware! This Fake Message Is Getting Viral On Social Media

Earlier, WhatsApp had informed users of an update in its Terms of Service and privacy policy regarding how it processes user data and partners with Facebook to offer integrations across the social media giant’s products.

Messaging app, WhatsApp has been grabbing headlines for past few days now. Earlier, WhatsApp had informed users of an update in its Terms of Service and privacy policy regarding how it processes user data and partners with Facebook to offer integrations across the social media giant’s products. It also stated that users will have to agree to the new terms and policy by February 8, 2021, in order to continue using WhatsApp’s service. Also Read - Neither Badminton Nor Tennis, Amol Gupte Reveals What Trolled Saina Poster Really Stands For

Soon after the announcement, users on social media expressed their concerns over the chat privacy after which the company issued a statement where it said that the its latest policy update does not affect the privacy of messages as the Facebook-owned company sought to address concerns around the security of user data on the platform. Also Read - Twitter Starts Rolling Out Spaces on Android in India, Know All About The Audio Chat Tool

In a blogpost, WhatsApp emphasised that it does not share users’ contact lists or data of groups with Facebook for ad purposes, and that neither WhatsApp nor Facebook can read messages or hear calls between users on WhatsApp. Also Read - Mumbai: Tuition Teacher Among 3 Arrested For Shooting, Sharing Obscene Videos on Pretext of YouTube Pranks

A message on social media is now getting viral where it has been claimed that Varun Pulayani’s (who claims to be director of WhatsApp) message if not forwarded to at least 20 people will lead to suspension of account from the new server. According to the claim, the reactivation of the WhatsApp account will incur a charge of Rs 25 per month. 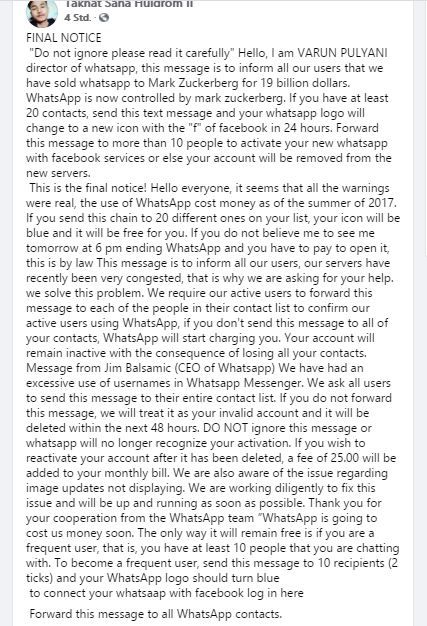 When our team started investing, we found that a Facebook user named Takhat Sana Huidrom II has posted this viral message in a public group.

This is not the first time that such fake messages had gone viral on social media. In this viral message, WhatsApp has been talked about being sold by Facebook owner Mark Zuckerberg for USD 19 billion, whereas earlier, the same claim was made with Mukesh Ambani. Apart from this, the rest of the claims of both viral messages are the same.

Our team has tried to scan the Facebook profile named Takhat Sana Huidrom II but could not gather much information.