"No one will have their account suspended or deleted on February 8. We're also going to do a lot more to clear up the misinformation around how privacy and security works on WhatsApp".

New Delhi: After backlash, WhatsApp has postponed its planned privacy update, announced this month. The instant messaging application asserted that the decision to postpone the privacy update has been taken due to ‘misinformation causing concern’ among people. Also Read - Twitter Announces New Feature That Would Let Users Charge Followers, Netizens React

“We’re now moving back the date on which people will be asked to review and accept the terms. No one will have their account suspended or deleted on February 8. We’re also going to do a lot more to clear up the misinformation around how privacy and security works on WhatsApp. We’ll then go to people gradually to review the policy at their own pace before new business options are available on May 15,” the company said in a statement. Also Read - WhatsApp's Fate Hangs in Balance as New Rules Require to Identify Originator of a Message | EXPLAINED

“The update includes new options people will have to message a business on WhatsApp, and provides further transparency about how we collect and use data. While not everyone shops with a business on WhatsApp today, we think that more people will choose to do so in the future and its important people are aware of these services. This update does not expand our ability to share data with Facebook”, it added. 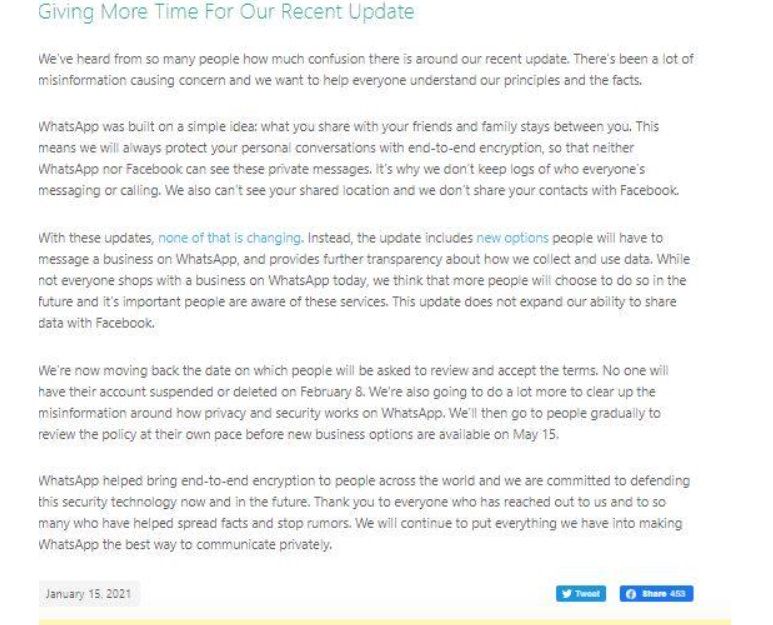 Notably, some of the users and media outlets have interpreted the notification as a marked shift in WhatsApp’s data-sharing practices, mistakenly believing that the company could now read people’s conversations and other personal data.

Since the announcement of the privacy update, many users switched to other messaging services such as Signal and Telegram. This week, Signal became the No. 1 app in India, one of WhatsApp’s biggest markets, on Apple and Android phones.