Video: Truth Behind Golden Chariot That Emerged From Sea in Andhra Revealed

New Delhi: A few days back, villagers along the Sunnapalli coast in Andhra Pradesh’s Srikakulam district were left perplexed after a ‘golden chariot‘ came floating on the Bay of Bengal coast due to the impact of cyclone Asani. The locals pulled it ashore after which the police took control of it, but everyone was clueless about how it drifted this far.Also Read - WATCH: Mysterious, Gold-coloured Chariot Washes Ashore at Sunnapalli Sea Harbour in Andhra Pradesh

It was believed that the chariot may have washed ashore due to high tidal waves from Thailand, Japan, Cambodia, Indonesia, or Malaysia. Speaking to reporters on the day when the chariot was found, the Naupada sub-inspector of police had said the lettering on the chariot and its structure suggested it could be of Myanmar origin. Also Read - Thanjavur Temple Chariot Festival Tragedy: 11 Electrocuted to Death, Several Injured; Probe Begins Into Incident

A date, 16-01-2022, was also found inscribed on the chariot, which looked more like a floating puja mandir.   “It is made of tin sheet and given a gold coloured coating. It looked like a puja mandir on wheels,” the SI said, adding that there was none onboard the chariot, SI stated. However, after a detailed inspection, local officials confirmed that the chariot belonged to Myanmar.

Was The Mysterious Chariot Made of Gold?

Taking to social media, netizens had claimed that chariot made of gold found in the ocean. “A chariot made of gold was swept to the coast in the Srikakulam district of Andhra Pradesh. The chariot is shaped like a monastery. Perhaps it floated all the way from Thailand or Myanmar and reached the coast of Andhra Pradesh”, a social media user had said, sharing a video of golden chariot. 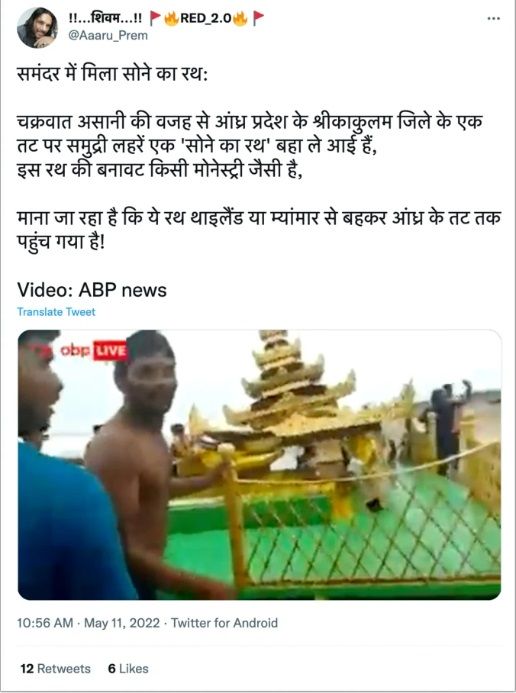 However, when a leading portal spoke to IAS officer Shrikesh B Lathakar, the collector of Srikakulam district, he clarified that the chariot was only golden in colour and not made of gold. “It was only a gold painted chariot. As its structure was made up of wood, it sailed up to sea coast of Andhra Pradesh. We handed it over to the local police for further action,” Marine police wing Circle Inspector G. Demullu told The Hindu.