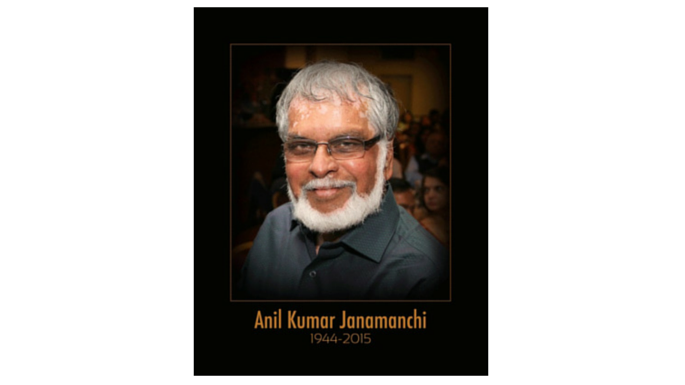 Anil was the Founder of Video Works; Executive Director, Samskriti, Indian Society for Performing Arts; and the heart and soul of the Anjali Center for Performing Arts. He was a child actor in movies such as Samsaramalong with Rathna Kumar whom he married in 1975. Anil worked for Burroughs, first in London and later on in Houston from 1970. Among his passions were theatre, Telugu literature and music. He was also an accomplished drummer. Gifted with a remarkably deep and resonant voice, Anil was much sought after for commercials as well as the radio media. His love for theatre made him take up acting classes both in London and at the University of Houston. Also Read - Obituary: Soumitra Chattopadhyay, The Actor With The Most Celebrated Stature in Bengal's Cinema, Dies at 85

Anil and Rathna, one of Houston’s popular ‘celebrity’ couples, have been well-known for their artistic accomplishments and as cultural ambassadors. Anil was Houston’s first videographer, for hundreds of weddings, plays, dance arangetrams and temple festivities. He was a creative individual with a great zest for life and an entrepreneurial spirit which led him to open Texas’s very first Indian restaurant, Maharaja, along with a group of like-minded friends. Also Read - ‘My Party is Over, Hope There is No Hangover‘: Chennai Man's Self-Written Obituary Goes Viral, Makes People Emotional

His tender, loving and dedicated care of his aged aunt-in-law is nothing less than extraordinary, and speaks volumes for the compassionate man that he was. Above all, Anil’s ready wit and humor, and his hearty laugh, will remain with us forever. Anil leaves behind a family that adored him – his wife Rathna (Papa to him), sons Chetan and Kedaar, daughter-in-law Miya, granddaughters Carissa and Anjali, and a host of family members and friends that span the world. Also Read - This Twitter User Wrote An Obituary For Death Of Media & Confused by The Wordplay, A Newspaper Actually Published It!

With the Hindu belief that “Jiva” is eternal – he now passes on but will eternally remain in the hearts of everyone he touched.

A gathering to celebrate the Life & Legacy of Anil Kumar is slated for Saturday, Feb. 28. It will be held at the Anjali Center from 3:00 to 6:00pm. Car pooling is suggested because of limited parking space availability.

The President and the Board of Directors of Samskriti mourn the death of our beloved Founder Executive Director Anil Kumar, husband of Artistic Director Rathna Kumar, Founder of Anjali Center of Performing Arts, Houston.

Ever since Samskriti’s inception, Anil was an integral part of our planning, organizing and administrative operations. His creative genius and title in presenting “Bollywood Blast” and “Incredible India”  for nearly ten years at the Miller Outdoor Theater that brought 5000 strong audience is in indeed incredible. His efforts helped Samskriti to bring to stage some of the finest of Indian performers, seminars and conferences.

He lived a good life of giving, sharing, caring, and smiling, and was above all he was a simple and a good person at heart. We will miss you always, Anil Kumar. Our thoughts and prayers are with the family to give them strength to bear the loss.

We remember you with this quote by Helen Keller: “What we have once enjoyed, we can never lose. All that we love deeply becomes part of us.”