Navratri means nine nights which are dedicated to Mother – the Adi Sakti. This beautiful festival comes every year but just like the rising sun has a new charm every single day, similarly year after year it flourishes the devotees’ hearts with new enthusiasm and devotion. 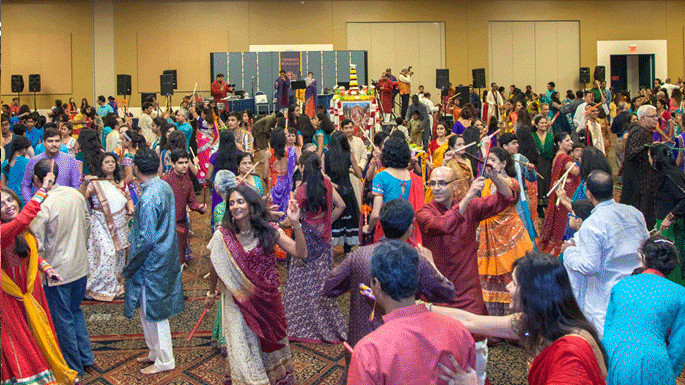 By Uma Aggarwal and Vinod Sharma
HOUSTON  (TX) – Navratri  means nine nights which are dedicated to Mother – the Adi Sakti. This beautiful festival comes every year but just like the rising sun has a new charm every single day, similarly year after year it flourishes the devotees’ hearts with new enthusiasm and devotion. Also Read - Ramlila in The Time of Corona: Ram Takes Covid Test, Shiva's Bow Sanitised & Bharat Wears Mask!

Friday night marked yet another annual celebration of Navaratri for Chinmaya Mission Houston family. The festive scene at the Stafford Center was resplendent in colorful decorations as the members entered the main Garaba Hall. The joyous atmosphere with members dressed in colorful saris, chaniya cholis and Indian ethnic clothes, the warm greetings of “Hari Om” and “Happy Navaratri” amongst the member and delicious food catered by Madras Pavilion delighted adults, youth and children alike. Also Read - Sonu Sood Honoured With Life-Size Statue at Durga Puja Pandal, Actor Calls it His 'Biggest Award Ever' 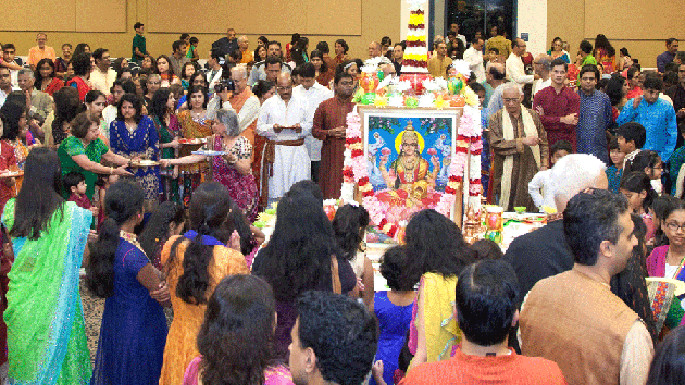 Hundreds of devotees participate in the Navratri puja seen here doing the aarti.

This devotional celebration of Navratri began precisely at 7:00 PM with prayers to Goddesses Durga, Sarasvati and Lakshmi who embody the three female qualities of courage, wealth and knowledge; and invocation to Pujya Gurudeva Swami Chinmayananda. To watch CMH family members dancing around the center decorations to the rhythm of the beats was a treat to everyone’s eyes.  But most of all it was the music, melodious singing of talented singers juxtaposed on reverberating music that was impossible to resist dancing too. A special music team consisting of singers, Ruchira Shah, Rucha Sheth, Priya Mohan, Badal Dave, with Darshak Thaker on drums, Kamal Haji on Key board and Srinivasan Raju as stage manager worked very hard to put up melodious music that consisted of mixture of classic and new Garabas. The MC Mr. Devang Shelat was very energetic, full of life and humor and energized all the danceers, himself dancing on the stage. A special treat in music was Sanedo sung by the music team, which was especially written for Chinmaya Mission in Hindi by mission’s very own poetess Uma Aggarwal. Also Read - Punjab IAS Officer Rakhee Gupta Releases Devotional Song on Lord Krishna, Video Goes Viral | Watch

Devotion and joy that filled hearts spilled over and was shared by all as they reveled in the oneness, togetherness and connection.

This Navaratri celebration brought joy to each and every one in a special way. One long term Mission member felt that the dance helped her to bask in the joy of oneness – the central theme of Vedanta teaching.  For another member it was a great occasion to connect with the Mission family at large – reinforce existing relationships, catch with old friends and learn more about acquaintances. Then for  One Balavihar high school student it was pure fun to celebrate with her classmates. She said “As a child, I remember seeing all the older kids doing complicated and fun steps during Dandiya, but this year I was finally old enough to be one of those older kids.” There was a huge sense of unity among all members – children, high school students, young adults, past students and adults, CHYKs all dancing in the same line, and while it was tiring, it was a blast, dancing with all my friends.