Tuesday September 2, 2014 harsh traffic and construction noise bellow out of the Houston freeways with frenzied commuters and truckers… just another day in paradise; later in the early evening reality reveals a place most wonderful. 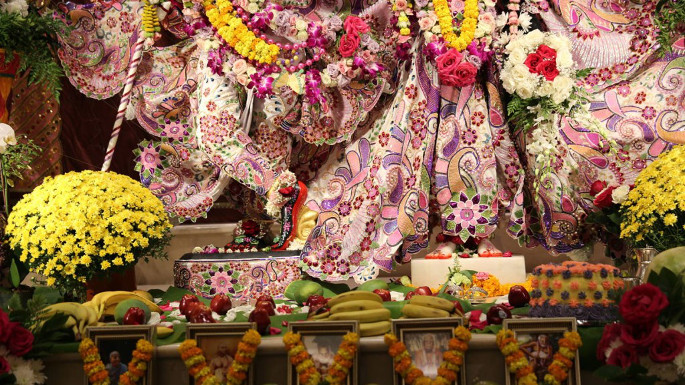 Tuesday September 2, 2014 harsh traffic and construction noise bellow out of the Houston freeways with frenzied commuters and truckers… just another day in paradise; later in the early evening reality reveals a place most wonderful.
At the Hare Krishna Dham on 34th Street I am entering into another realm of Houston, a transcendental one, a secret and secure oasis for all. Miraculously the blaring of truck and car horns have become soothing emanations from the sound of a conch-shell, the street lights and signals now sparkle as reflections from the sequins and ornaments upon a magnificent Altar. Also Read - KXIP vs RCB IPL 2020 Live Cricket Score: Kohli Out, AB De Villiers Comes in

How has this happened? It is none other than Sri Sri Radha’s blessings in action. This is a celebration of Radhastami at ISKCON of Houston, plus a grand opening for a new school, GOSWAMI ACADEMY / GOKUL KIDZ Kindergarten-4 and Pre-school, making this now a double special-event day! Also Read - IPL 2020, CSK vs DC Predicted Playing XIs, Pitch Report, Toss Timing And Dubai Weather Forecast For Match 7

Since it is Srimati Radharani’s appearance day, many have called upon Her to celebrate Her glories, She humbly abides, but for Her, all Glories go to a partner on Her right, Her beloved Sri Sri Nila-Madhava. Radha has modestly lifted her long radiant skirt and gracefully reveals Her beautiful lotus-like feet, bringing feelings of bliss and ecstasy to all who view.

Appropriately, the evening’s guest speaker is Mrs. Subhra M. Lind, the Temple’s new school principal. Sharing the pastimes of dear Radharani is not an ordinary thing, great discretion is needed. Mrs. Lind enunciated the story of the “Tormented Jackal” which seemed best for the guests, for this “Jackal” is part of all of us.  Summarizing, a lone Jackal wanders into the local village and is being harassed by children and naïve citizens to the extreme anguish. Retreating to a burrow, a fire is placed at the entrance and the Jackal is piteously whelping. Radha hears of the animal’s plight comes to the Jackals aid, embarrassing and humbling the obsessive villagers. The symbolism of this burning material world, badgering entities and our “Jackal” like minds are imbued in this tale and it is only the mercy of God and His associates we can escape.

Bringing such storied pastimes is also part of the GOSWAMI ACADEMY agenda. The school motto; “Education for Perfection” is reviving essential Spiritual knowledge and practical application in modern academia using an inquiry based curriculum within the foundations of our existence. There are also other goals in Spiritual and character development, life enhancing creative arts and advancement of consciousness and technology.

His Divine Grace A.C. Bhaktivedanta Swami brought these important Vedic celebrations to us from the East and was also emphatic about our children’s education. The schools started in Texas in the 70’s are now primers for GOSWAMI ACADEMY. His grace Maharaja Tamal Krishna Goswami also confirmed this and asked his disciples in Houston to begin schools. It is in their honor all have dedicated to continue this most important heritage.

The analogy of a “learning tree” comes to mind and from the 150 plus years of Vedic education in America, there have been many branches, some twisted, some fruitless, regardless the roots of Goswami Academy are strong and deep into the Vedic Sampradaya (Disciplic School System). The trunk of devotion and limbs of wisdom are sound, the remaining branches are being carefully pruned. There is no doubt that these schools are succeeding in transplanting the universal Vedic knowledge to the West, and fulfill the World’s thirst for moral sustenance and hunger of technological understanding. The children themselves will confidentially say “I was there”, and the future of humanity, sentient beings, environment and the Earth itself will be much brighter.

Concluding this magnificent day with all the excitement, grandeur and school commemorations a sumptuous feast was served, people dined and smiled continuously and many were taking birthday cake home for another taste of Radharani’s bliss on the following day… fortunately I managed to taste some too.