Makar Sankranti: The Use and Significance of Sesame Seeds in the New Year Festival

Makar Sankranti is one of the most auspicious days for the Hindus, and is celebrated almost universally across the country, in many forms and hues, with great devotion, fervor & gaiety. 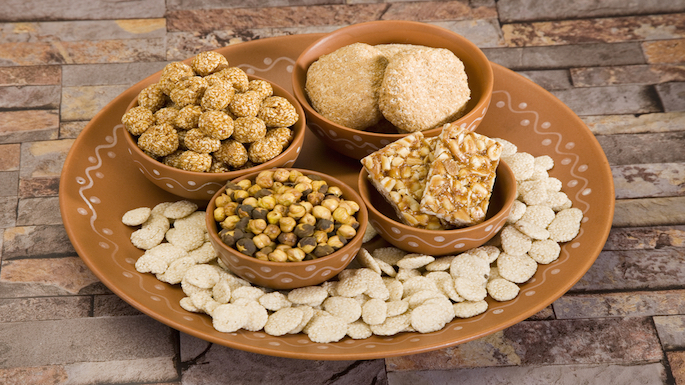 Makar Sankranti is one of the most auspicious days for the Hindus, and is celebrated almost universally across the country, in many forms and hues, with great devotion, fervor & gaiety.

As the first festival in the year’s calendar, it is eagerly awaited by one and all. Considering India’s size and diversity, it is no surprise that the celebration of Sankranti is varied, and is celebrated in many different ways. The celebration of this festival has more than spiritual reasons to it. Deep scientific and cultural reasons also exist for the gaiety and vibrancy of the festival.

As the earth orbits around the sun over the course of one year, it also wobbles about its axis, just like a spinning top. This makes the sunlight fall on different parts of the world at different angles, bringing about the different seasons. For half the year, the sun travels northwards, and the other half of the year, it travels southwards. That is why, when the Northern hemisphere has winter, the Southern hemisphere has summer. In the Northern Hemisphere,

December 21 is the day when we are tilted the furthest away from the sun. That is the shortest day of the year, the winter solstice. When the sun travels southwards, the days are shorter, colder, there is less sunlight and crops don’t grow well and as desired. Thus, for Indians, the northward journey of the sun is advantageous and eagerly awaited.

According to the Hindu astronomy, on Makar Sankranti, the sun enters the Makara rashi
(Capricorn). On Makar Sankranti day, 14th January, the sun no longer moves southward and begins its northward journey (Uttarayan). Makar Sankranti marks the end of a long winter with the return of the sun to the Northern Hemisphere and hence the name Uttarayan. After this day the days start becoming longer and warmer, and thus the chill of winter declines.

It signifies the end of winter and the beginning of spring, when the trees start becoming green again, the flowers bloom and the weather becomes pleasant. Sankranti represents the beginning of the farming season and people across the country rejoice, and therefore it is no surprise that this festival is universally celebrated and welcomed with glee by the farmer community, who pray on this occasion to be blessed with bountiful harvests that year.

Unlike other festivals, which are based on the traditional Indian Calendar, which is set according to Lunar positions, sankranti is a solar event. Thus, while the dates of all Indian festivals keep changing every year, the English calendar date of Makar Sankranti is always the same – 14th January.

This festival is celebrated differently in different parts of the country.

In Uttar Pradesh, Sankrant is called ‘Khichiri’. People take a dip in the Ganges or other holi waters and eat the rice and lentil preparation of Khichri. In Bengal it’s called Makar/Til Sankranti. Every year a very big Mela is held at Ganga Sagar where the river Ganga is believed to have dived into the nether region and vivified the ashes of the sixty thousand ancestors of King Bhagirath. People take a dip in the holy rivers and a lot of sweets  called “pethas” are made out of rice, jaggery,til etc and exchanged. Special prayers are organized.

In Tamil Nadu Sankrant is known by the name of ‘Pongal’, which takes its name from the surging of rice boiled in a pot of milk, and this festival has more significance than even Diwali. It is very popular particularly amongst farmers. Rice and pulses cooked together in ghee and milk is offered to the family deity after the ritual worship. In essence in the South this Sankrant is a ‘Puja’ (worship) for the Sun God. In Andhra Pradesh, it is celebrated as a three-day harvest festival Pongal. The Telugus like to call it ‘Pedda Panduga’ meaning big festival.

The whole event lasts for four days, the first day Bhogi, the second day Sankranti, the third day Kanuma and the fourth day, Mukkanuma. In Maharashtra on the Sankranti day people exchange multi-colored tilguds made from til (sesame seeds) and sugar and til-laddus made from til and jaggery. Til-polis are offered for lunch. While exchanging tilguls as tokens of goodwill people greet each other saying – ‘til-gul ghya, god god bola’ meaning ‘accept these tilguls and speak sweet words’. The under-lying thought in the exchange of tilguls is to forget the past ill-feelings and hostilities and resolve to speak sweetly and remain friends.

This is a special day for the women in Maharashtra when married women are invited for a get-together called ‘Haldi-Kumkum’ and given gifts of any utensil, which the woman of the house purchases on that day.

In Gujarat Sankrant is observed more or less in the same manner as in Maharashtra but with a difference that in Gujarat there is a custom of giving gifts to relatives. The elders in the family give gifts to the younger members of the family. The Gujarati Pundits on this auspicious day grant scholarships to students for higher studies in astrology and philosophy. This festival thus helps the maintenance of social relationships within the family, caste and community.

Kite flying has been associated with this festival in a big way. It has become an internationally well-known event. In Punjab where December and January are the coldest months of the year, huge bonfires are lit on the eve of Sankrant and which is celebrated as “Lohari”. Sweets, sugarcane and rice are thrown in the bonfires, around which friends and relatives gather together. The following day, which is Sankrant, is celebrated as Maghi. The Punjabi’s dance their famous Bhangra dance till they get exhausted. Then they sit down and eat the sumptuous food that is specially prepared for the occasion.

In Kerala the 40 days anushthana by the devotees of Ayyappa ends on this day in Sabarimala with a big festival. In Bundelkhand and Madhya Pradesh this festival of Sankrant is known by the name ‘Sakarat’ and is celebrated with great pomp and merriment accompanied by lot of sweets. Many tribals  in our country start their New Year from the day of Sankrant by lighting bonfires, dancing and eating their particular dishes sitting together. The Bhuya tribals of Orissa have their Maghyatra in which small home-made articles are put for sale. In Assam, the festival is celebrated as Bhogali Bihu. In the coastal regions, it is a harvest festival dedicated to Indra.

Importance of Til (Sesame seeds) in Makar Sankranti

Before distributing sweets made out of sesame seeds, they are kept in front of an  idol or a picture of a Deity on one’s altar. This helps retain the Shakti (Divine Energy) and Chaitanya in the sweets. It is known to eliminate sins if used in drinking water, bathing, applying til oil on the body and other uses. When distributing sweets made of sesame seeds, bhāv (spiritual emotion) and Chaitanya is awakened in us.

All the members of the house derive the benefit of the increased Chaitanya in the environment. The prembhav in people increases and they are able to overcome negative thinking and replace it with positive thinking. According to Āyurvēda, eating sesame seeds in winter is beneficial for our health. Spiritually, sesame seeds and sesame oil have the ability to absorb and emit Sattva frequencies more than any other oil.

Hence, during Makar Sankranti, sesame seeds are favorable for good sadhana to happen. Importance of sesame seed sweets: Sesame seeds have the ability to absorb and emit high amounts of Sattva frequencies. By consuming sesame seed sweets, inner purification happens which helps improve one’s sadhana. By distributing these sweets to each other, there is an exchange of sāttviktā, which helps increase everyone’s sattvikta

Not only are sesame seeds an excellent source of copper and a very good source of manganese, but they are also a good source of calcium, magnesium, iron, phosphorus, vitamin B1,B6 Thiamin Folate and Niacin, zinc, molybdenum, selenium, and dietary fiber, proteins and carbohydrates. In addition to these important nutrients, sesame seeds contain two unique substances: sesamin and sesamolin.

Both of these substances belong to a group of special beneficial fibers called lignans, and have been shown to have a cholesterol-lowering effect in humans, and to prevent high blood pressure and increase vitamin E supplies in animals. Sesamin has also been found to protect the liver from oxidative damage.

It is also known to help in reducing cardiovascular diseases and hypertension; reduces signs of premature aging and strengthening muscle tissue and hair. It is known to be very beneficial in protecting DNA from harmful effects of radiation either from accidental or natural sources or caused by chemotherapy or radiotherapy.

Caution: Excessive consumption may cause irritation in stomach and colon.

Happy Makar Sankranti to all readers!