The Gujarati Samaj of Metropolitan Washington hosted a meet and greet event for a delegation that is visiting North America to promote the Vibrant Gujarat Summit 2015, scheduled to be held in January 2015. 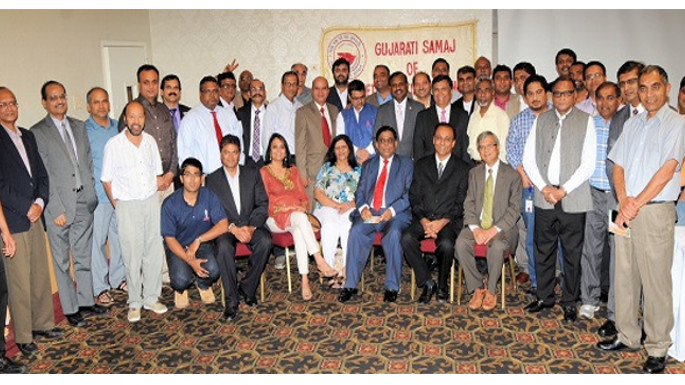 By Sirmukh Singh Manku
COLLEGE PARK, MARYLAND–The Gujarati Samaj of Metropolitan Washington hosted a meet and greet event for a delegation that is visiting North America to promote the Vibrant Gujarat Summit 2015, scheduled to be held in January 2015. Also Read - ReNew Power secures OPIC debt funding of up to USD 350 mn

The 14-member delegation, which consists of senior Gujarat government officials and business leaders, arrived in the United States on September 4, after visiting the Canadian cities of Montreal and Toronto. It flew to Washington from Chicago where it held a number of meetings. Also Read - India's coal import rises 5% to 190 MT in Apr-Jan

Vibrant Gujarat will take place at Mahatma Mandir in Gandhinagar from January 11 to 13 next year. The same venue will also be hosting another mega event three-day Pravasi Bharatiya Divas, during January 7-9. Also Read - Novel fabric adapts to keeps you comfortable in all weathers

Members of the delegation invited the local Gujarati and Indian American community members to attend Vibrant Gujarat and the Pravasi Bharatiya Divas.

Earlier on Monday afternoon, the delegation made a sales pitch to a select audience of US business and thought leaders at a downtown Washington, DC, hotel. That event was co-hosted by the Confederation of Indian Industries and the US-India Business Council. Gujarat’s Resident Commissioner Bharat Lal and Indian Ambassador to the United States S. Jaishankar spoke at the event.

During its two-day stay in the nation’s capital, the delegation held talks with various US officials, including Assistant Secretary of Commerce Arun Kumar, and representatives of various American businesses.

Its other stops in the United States are New York and Boston.