Dr. Vivek Hellegere Murthy is the New US Surgeon General

In a nation where every Indian American child is expected to at least become a physician, it could be the most apt appointment ever for the community to cheer: Dr. Vivek Hellegere Murthy was confirmed today in the US Senate by a vote of 51-43, making him the new US Surgeon General, the country’s top doctor. 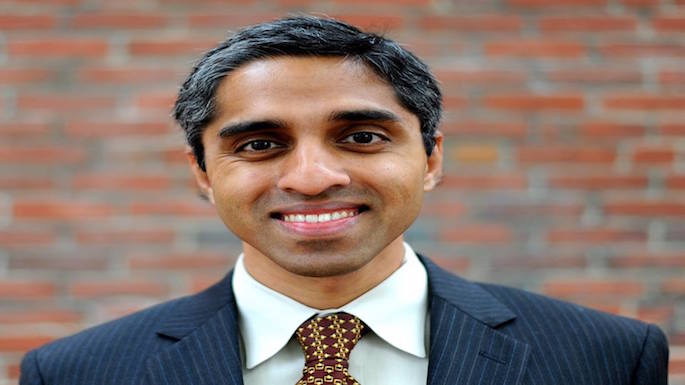 NEW YORK— In a nation where every Indian American child is expected to at least become a physician, it could be the most apt appointment ever for the community to cheer: Dr. Vivek Hellegere Murthy was confirmed today in the US Senate by a vote of 51-43, making him the new US Surgeon General, the country’s top doctor.

The Surgeon General’s post is a four-year term which oversees the U.S. Public Health Service Commissioned Corps, an elite group of more than 6,800 uniformed officer public health professionals working throughout the Federal government whose mission is to protect, promote, and advance the health of the nation. Murthy is now the top spokesperson on all health related issues in the US.

Murthy, 37, who was born in England, and grew up in Miami, Florida, to parents from India – his father is a physician too— becomes in the process the youngest US Surgeon General too, after he was nominated last year in November by President Barack Obama.

Murthy’s confirmation became contentious after the Republicans pounced upon a tweet he sent on making guns a health care issue, and portrayed him as against the National Rifle Association.

As time ran short before the Republicans came into power in both the Senate and the House next year – which many predicted would be the end of Murthy’s chance for the post, it was the outgoing Senate Majority Leader from Nevada Harry Reid who stepped in and got a procedural vote in favor of Murthy out of the way, on Saturday. The voting count today was a formality, and was almost on expected lines as the Saturday one.

Murthy, an alum of Harvard University and Yale University, is close to his Indian roots. He had co-founded with his sister a nonprofit organization, VISIONS Worldwide Inc., devoted to AIDS education in India. He’s also a co-founder and president of Doctors for America.

There was a visible buzz in the Democratic Party circles, with several US House of Representative members congratulating and sending in their best wishes to Murthy.

California Congressman Ami Bera, who is also the new co-chair of the India Caucus and a physician himself, said in a statement: “I’m thrilled the Senate has confirmed Dr. Vivek Murthy as our next surgeon general. As a practicing physician and instructor at Brigham and Women’s Hospital, a champion of innovation in medicine, and a leader in the medical community, Dr. Murthy is an excellent choice for this role and his appointment is historic for the Indian American community. As a doctor myself, I also know that the American people will benefit from having a trusted physician leader to help them navigate the complex medical issues we face today.”

Rep. Joe Crowley (D-Queens, the Bronx), Vice Chair of the Democratic Caucus and the outgoing co-chair of the Congressional Caucus on India and Indian-Americans, said in a statement: “I congratulate Dr. Murthy on his confirmation as our nation’s next surgeon general. He is a dedicated fighter for public health and I know he will work tirelessly to improve the health of all Americans. I was proud to stand with him during his confirmation process, and I look forward to working with him in his new role.

“I’m glad that this nomination didn’t fall victim to partisan bickering and pressure from special interests, but this is more than a political victory. The confirmation of the first surgeon general of Indian descent is a victory for the entire Indian-American community, whose young children will grow up knowing that anything is within their reach.

Crowley added: “It’s a victory for our medical community, with a dynamic and skilled physician leading our public health policies as our nation’s top doctor. “And, this is a victory for the American people and ensuring better health for all.”

Congresswoman Grace Meng (D-NY) hailed the Senate’s confirmation of Murthy as U.S. Surgeon General. She said in a statement: “Dr. Murthy will make an outstanding Surgeon General and I applaud the Senate for confirming him. Although the vote was long overdue and never should have taken this long, I am happy that it finally occurred. I now look forward to him getting to work to address the important health needs of Americans.