Among the nearly 100 individuals who were presented with the prestigious Ellis Island Medal of Honor this year, were six Indian Americans and one British Indian who were recognized for their contributions and service to the United States. 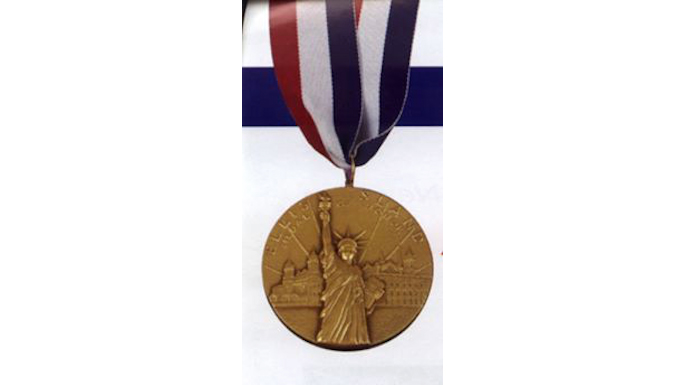 The Ellis Island Medal of Honor.

WASHINGTON, DC—Among the nearly 100 individuals who were presented with the prestigious Ellis Island Medal of Honor this year, were six Indian Americans and one British Indian who were recognized for their contributions and service to the United States.

Baroness Sandip Verma — a member of the House of Lords and former junior minister at the Department of Energy and Climate Change in the United Kingdom — also received the annual award, which was presented recently in New York. She was formerly a Government Whip and Spokesperson for the Cabinet Office, International Development and Equalities and Women’s Issues, according to British Parliament’s official website. Born in Amritsar in Punjab, India, she immigrated to England as a child in 1960 along with her parents.

Meera Gandhi is a Mumbai-born humanitarian who founded and serves as the chief executive officer of The Giving Back Foundation, a foundation geared towards alleviating illness, poverty and suffering while also addressing education issues which affect women and children around the globe. The daughter of an Irish mother and Indian father, Gandhi’s mission was inspired by Mother Teresa, whose orphanage she volunteered at as a 16-year-old growing up in Mumbai.

Dr. Chad P. Gehani is a former president of the New York State Dental Association and currently lives in Queens, New York. In 2006, he was awarded the Foundation of Excellence in Community Service Award by the New York State Dental Foundation — which is not to be confused with the organization he formerly headed. Aside from serving as president of the ADA and a brief stint as trustee last year, according to his LinkedIn profile Gehani has been as associate clinical professor at New York University since 1982.

Rahul M. Jindal was honored for his service as a staff transplant surgeon at the Walter Reed National Military Medical Center and professor of Surgery and Global Health at Uniformed Services University of Health Sciences in Bethesda, Maryland. In 2013 Jindal was honored with the Leadership Award by the International Leadership Foundation in Washington. He also received the Outstanding American by choice award from U.S. Citizenship and Immigration Services in the same year, according to the Economic Times of India.

Mona Sinha is both a founding member and chairperson of the Asian Women’s Leadership University that is being established in Malaysia. She is also a trustee of both Smith College and All Souls School, serves on the Board of Social Enterprise Program at Columbia Business School, and is on the advisory council of the American Museum of Natural History. According to Women Moving Millions, she began her professional career as an investment banker at Morgan Stanley, followed by a marketing career at P&G and Unilever, during which she helped restructure the Asia Pacific operations of Elizabeth Arden.

K.V. Kumar, who emigrated from Bengaluru according to WKRG News, operates as the managing partner of Kumar & Talvadkar Associates, a management consulting company. Kumar has revitalized numerous seemingly doomed projects, including a privately held healthcare company in Southern California, reported The Times of India.

The Ellis Island Medal of Honor is an American award founded by the National Ethnic Coalition of Organizations which pays homage to the immigrant experience and the contribution made to America by immigrants and their children.