The 7th Annual Independence Day Mushaira-Kavi Sammelan, organized by the Aligarh Alumni Association (AAA), Washington, DC chapter and the Global Organization of People of Indian Origin (GOPIO), Washington-Metro, was held at the Fairfax County Library in Herndon, Virginia on August 30. 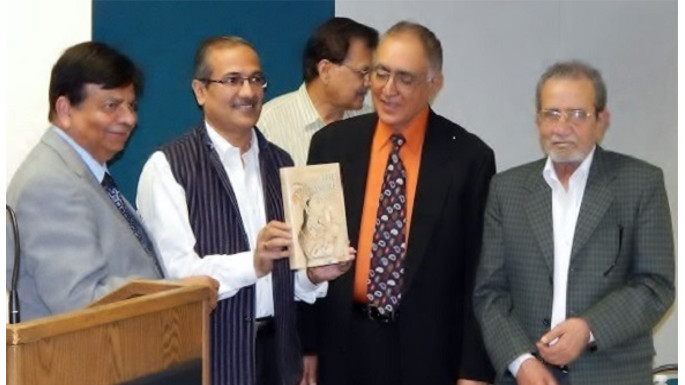 N. K. Mishra showing a copy the book “The Treasure: A Modern Rendition of Ghalib’s Love Poetry” by Surinder Deol.

“The beauty of Ghalib’s poetry is that your appreciation of his poetry grows more as you listen to it,” said N. K. Mishra, Minister, Cultural Affairs, Embassy of India, at the meet, who also released a book, The Treasure: A Modern Rendition of Ghalib’s Love Poetry by Surinder Deol. Also Read - 'Rahul Dubey is an American Hero': Twitter Hails Indian-American Man Who Sheltered 75 Protesters From Police During George Floyd Protests

“This book is a welcome addition to the slim corpus of Ghalib in English translation, not only because it has a sure method, but also because it does not sacrifice the essential Ghalib,” said Prof. Satyapal Anand, presiding over the book release ceremony.

“Surinder Deol’s rendition of Ghalib’s poetry into English is a reflection of his in-depth understanding and sincere love for Ghalib’s multifaceted poetic compositions,” said Dr. A. Abdullah, commenting on the book.

In his talk, Deol said Ghalib became popular because one can find expressions of innovative thoughts full of metaphors and similes, and also a wide range of topics and subjects in his poetry.

The president of GOPIO-Washington-Metro, Dr. Zafar Iqbal, said that the goal of the program was to provide a forum where people could get together transcending political, religious, regional, and geographical boundaries promoting the culture of the subcontinent.

Dr. A. Abdullah, the most adored conductor of poetry recitation sessions, mentioned in his introductory remark that the increasing number of participants and audience in these programs is a testimony to the desire of people to share the common heritage.

“Hindi and Urdu are twin sisters, who have different attire and are marching forward side by side in India and all over the world,” said Dr. Abdullah.

This story originally appears on The American Bazaar.