The yoga fever, which has been spreading across the United States in the past two decades, has finally reached the Capitol Hill, the seat of US Congress, with the newly formed Congressional Yogi Association hosting its first Yoga on the Hill on Friday. 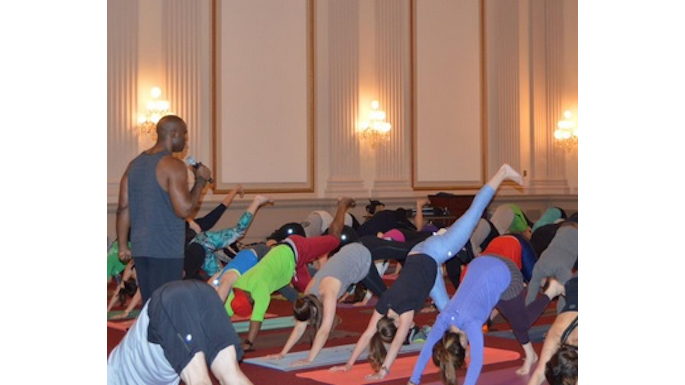 WASHINGTON, DC— The yoga fever, which has been spreading across the United States in the past two decades, has finally reached the Capitol Hill, the seat of US Congress, with the newly formed Congressional Yogi Association hosting its first Yoga on the Hill on Friday. Also Read - Public Emergency in Washington DC For Next 15 Days Due to Rioting by Trump Supporters at US Capitol

The event had the blessing of the Embassy of India, which had its own curtain-raiser for the International Day of Yoga on Wednesday, with a speech by Art of Living founder Sri Sri Ravishankar.

An embassy press release said Counselor Mohit Yadav, who spoke on the occasion, highlighted Prime Minister Narendra Modi’s speech at the United Nations last September: “Yoga is an invaluable gift of India’s ancient tradition. It embodies unity of mind and body; thought and action; restraint and fulfillment; harmony between man and nature; a holistic approach to health and well-being. It is not about exercise but to discover the sense of oneness with yourself, the world and the nature. By changing our lifestyle and creating consciousness, it can help us deal with climate change.”

The three members of Congress who were present spoke about the benefits of yoga.

“I have found that mindfulness and the practice of yoga help to reduce stress, improve concentration, and increase feelings of well-being,” said Ryan. “I am happy to support the first annual Yoga on the Hill event and the Congressional Yogi Association in raising awareness for the many benefits a yoga practice can bring to individuals across the country.”

“As a Korean War Veteran, Yoga on the Hill’s mission to promote wellness among the veteran community is close to my heart,” Rangel said.

His Democratic colleague Lee echoed the sentiment: “As we begin Mental Health Awareness month, I hope that today’s event increases awareness about the benefits of practicing yoga, especially for our veterans. As a member of the subcommittee responsible for funding our veterans programs, I hope that we will continue expanding research and access to health alternatives like yoga that improve the quality of life for our brave veterans.”

The Congressional Yogi Association was recently formed with the motto, “Not Left. Not Right. Just Balance.”

According to its website, its aim is to “make yoga more accessible to Members and staff to promote mental and physical wellness on the Hill, both for seasoned yogis and beginners.”

Yoga is a $6 billion industry in the United States and close to one in 15 Americans practices yoga, according to Yoga Journal.