BC Premier Gets Presented ‘The A-List’

Christy Clark, the amiable and friendly premier of British Columbia province of Canada, that has a large population of people of Indian origin, is not the stereotypical politician. 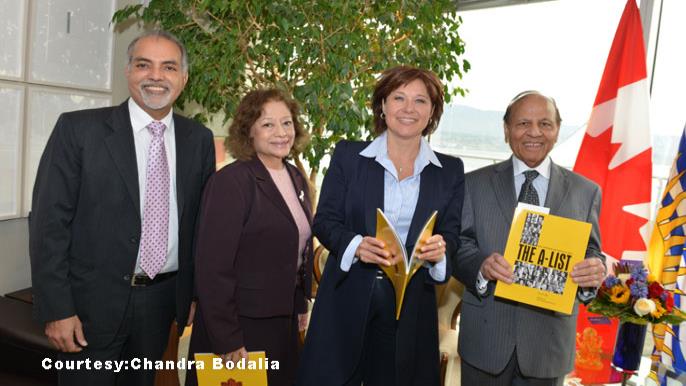 Christy Clark, the amiable and friendly premier of British Columbia province of Canada, that has a large population of people of Indian origin, is not the stereotypical politician. Along with Vancouver-based businessman and philanthropist Barj Dhahan and my wife Rosalinda Jain, I met her at her Vancouver office to present her a copy of “The A-List” (The Indian Diaspora publication) in which we have profiled 48 eminent and highly successful people in various disciplines and walks of life.

Of these 42 are Indo-Canadians and six are ‘Friends of India’ and they include two Federal Ministers: Jason Kenney and Ed Fast.

Nine of them are British Columbians and as I started naming names – Barj Dhahan is one of them — he was feeling a bit shy hearing his name for the tremendous work that he and his family have done and are doing in the education field. Dhahan is instrumental to a sizeable extent in the founding of the Canada-India Centre of Excellence at Carleton University. His family is instrumental in establishing a nursing college in Punjab that’s now affiliated to the University of British Columbia.

Premier Clark, on receiving “The A-List,” started turning the pages — and she started identifying British Columbians: “Oh here’s our friend Dr. Arvind Gupta, President of the University of British Columbia” and she burst into laughter looking at her own picture with Dr. Gupta. “Here’s another friend Dr. Arun Garg…..”

I emphasized on the contribution that Satwinder Bains of the University of Fraser Valley is making teaching young students about the history of Indo-Canadians, about the Komagata Maru tragedy of 1914, etc.

Premier Clark was undoubtedly pleased to hear that and see for herself the contributions that the Indo-Canadian British Columbians are making to their community, to British Columbia and to Canada.

Chris Gardner, Principal Secretary to Premier Clark was also sitting in the Premier’s office during our meeting. He was quietly smiling, invariably nodding his head in approval as I was talking about the Indo-Canadian community and why and what “The A-List” is all about.

Our discussion with the Premier also had bearing on India’s Prime Minister Narendra Modi’s first official visit to Canada (April 14-16) and the last day he would spend in Vancouver when he would visit  Ross Street  Gurdwara  (Khalsa Dewan Society which was established as far back as in July 1906) and which’s now the largest  Gurdwara in North America. He will also visit the Hindu temple.

Premier Clark referred to her two official visits to India and second one was late last year: “We couldn’t meet PM Modi,” she said. “After all he’s a very busy leader …” and she was not even sure of the Indian leader’s detailed program in Vancouver. “The federal government is handling this, and, I believe, I will have a chance of welcoming him in Vancouver…”

She was very generous in terms of her time. We spent close to 30 minutes in her office before realizing we were taking too much of her time. As we were conducted in her office, I saw several people waiting in the reception area.

It was all handshake, one by one, as we made our way out of her office, with the premier generously extending her right hand first with a broad smile on her face.

Premier Clark was not the first political leader whom I presented the copy of “The A-List”: The first copy of the publication was presented to Prime Minister Stephen Harper in his Parliamentary office in Ottawa on Feb. 4, 2015  then to Mrs. Laren Harper at 24 Sussex Drive in Ottawa the same day, and it was formally released at an event at Carleton University on February 5, 2015. That event was hosted by University President, Dr. Roseann O’Riley Runte where the chief guest was Canada’s current Minister of National Defence, Jason Kenney.

Our readers, supporters and well wishers should wait for the second ‘A-List’, which too, like the first one, will an acclaimed and signature publication of The Indian Diaspora, the publication which’s primarily meant to give collective profile to the Indo-Canadian community that now comprises of close to 1.2 million people.

(Ajit Jain can be contacted at ajit.jain0410@gmail.com)